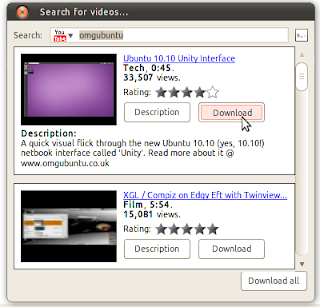 Downloading and converting videos from popular video sharing services like YouTube, Dailymotion, CollegeHumour and Veoh has been made super easy thanks to desktop application DamnVid.

In their own words DamnVid is described as “…a video downloader and converter that sucks less.” Now, you can’t argue with that!

Making use of the FFMpeg library, as used in VLC and Google Chrome, DamnVid can covert local files on your harddrive to many popular formats – from ‘same quality as source’ to iPod, flash (h.246) & more.

Online Sites
Downloading and converting streams from popular sharing sites is also straightforward. You enter the URL and hit the download button. You’re also able to search YouTube videos from the application itself. DamnVid has an added bonus up its sleeve by doing both the downloading and the converting at the same time: it converts as it downloads, making the whole process much faster.

And you know what? It really is pretty swift at crunching through a download-convert combo. Downloading one of my own videos from YouTube took less than 30 seconds. 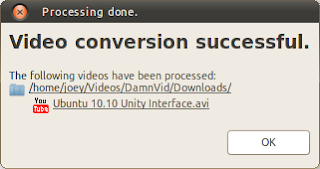 For users who loathe flash, want to keep their favourite videos available for watching on the road or use Ubuntu on the PPC platform – DamnVid is a great solution.

PPA Installation
Installing DamnVid from its PPA means you’ll be kept up-to-date with the latest bug fixes and releases.

You can proceed to run DamnVid from the Applications > Sound & Video menu.

Home » Downloading and Converting online videos made easy with DamnVid