Jack Wallen over on TechRepublic posted an interesting piece about a discussion that’s been buzzing on the Ayatana mailing-list over the last few days.

It centers around an idea that, like other proposals we’ve featured the last few weeks, seeks to make use of the space left by the moving of window control buttons to the left.

‘Esfera’ is the name of the concept and it’s too awesome not to explain here.

Esfera introduces a new gesture based control to window borders that can do some pretty spiffy stuff. In the mock-up below it is the giant blue dot “3 times wider than normal” buttons 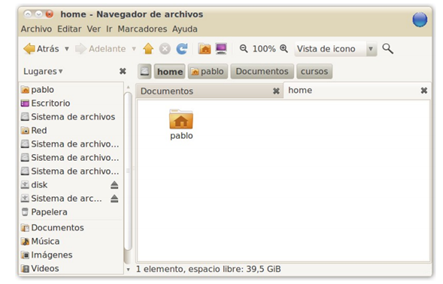 Now remember we said Esfera is a gesture based control? The idea is that: –

Being able to see/use the ‘back’ of a window presents many, many possibilities – notes, application related activities/launchers/files, etc.

As Jack Wallen says – “The ideas are limitless.”

Other ideas have been put forward include more ‘simple’ gestures to speed up workflow such as: –

Out of all the current ‘right-hand side replacement actions’ mooted or proposed this one is certainly the most exciting. Sadly I’m not sure if all of it is actually feasible. That said i’ll be following the discussion closely from now on and keep you posted!

All pictures copyright/belong to Pablo Quirós