It’s set to be the biggest and best release of Ubuntu so far and it impresses right from the get-go with an impressive installer, fast boot times, new artwork and a whole lot more.

Meet quite possibly the best operating system on the planet – Ubuntu 9.10 Karmic Koala!

So what’s new in Ubuntu 9.10? Let’s take a quick visual over-view of what you’ll find inside…

The install process has been refined for 9.10 and now requires less confused stares, less clicks and less time to get it installed and up and running. 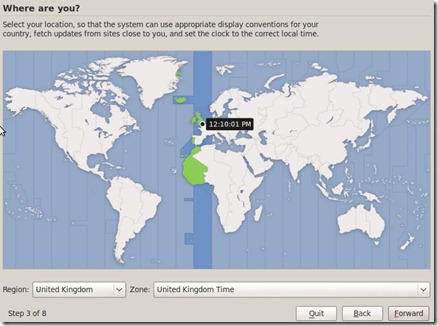 New options are also presented during install, such as creating an encrypted home partition. 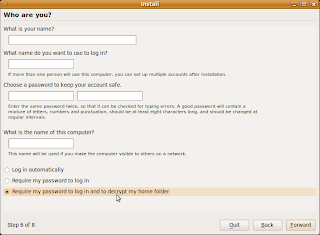 The migration assistant allowing you to transfer files from Windows or other operating system on your system has been removed from the install process. An odd choice perhaps, but you can still access it from the main menu on the desktop.

During the installation of Ubuntu, your eye will be caught by a shiny new slideshow highlighting applications and features in Ubuntu. 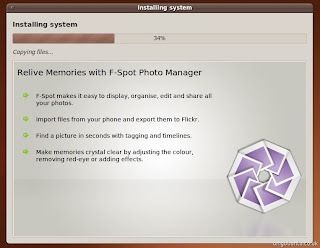 One of the slides playing during an Karmic install

EX4, Grub2 and other “boring” bits

This may not sound very interesting but Ext4 gibes you a performance, as well as security, boost. It’ll even support that spare 1 Exbibyte drive you may have lying around…

Grub 2 is now used for your boot menu. This is a total rewrite of GRUB bringing with it better performance, features and even a auto-cleaner for dead entries.

Please note that existing systems will not be upgraded to GRUB 2 at this time as automatically reinstalling the boot loader is an inherently risky operation.

Other “boring” additions include:-

On your first boot up you will surely notice the new Ubuntu splash screen. A visually stunning success, it helps set the entire mood for the Koala. 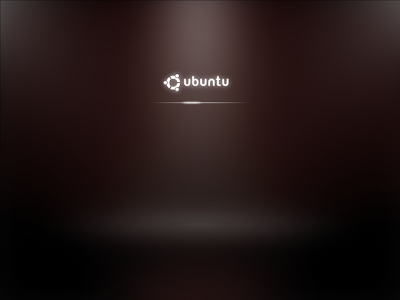 The login screen (GDM) has received an entire re-write and ties in with the theme of the splash screen: – 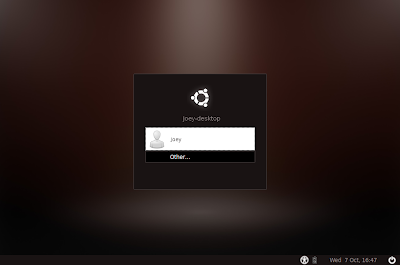 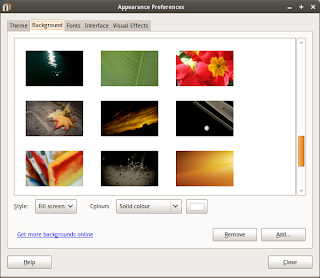 As well as a bright new default one: – 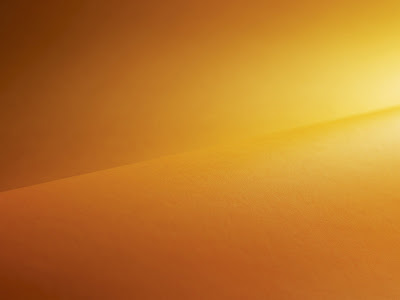 The Human Theme has swapped it’s colours from Orange to Brown: –

User-Session-Applet
The “logout menu”, as a lot of people seem to call it, gets some swish new icons for setting your IM status.

one of the new status icons; away

Logging out shows you this gorgeous little screen, but be quick because shutting down now happens in the blink of an eye! 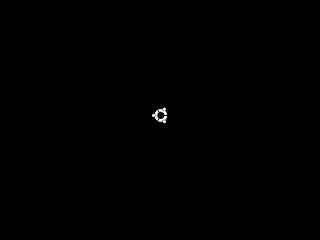 One of the biggest new features of 9.10, Software Centre is designed as your “one stop shop” for finding, installing and managing new applications. Choose a category, find an app, click install. Done! 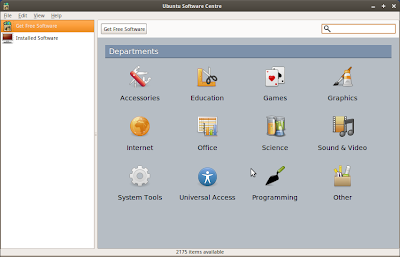 In later releases the Software Store will become -the- literal one stop shop as it replaces Synaptic, Update Manager and allows developers to sell applications.

Empathy
Pidgin has been replaced as the default IM client by Gnome application ‘Empathy’. Looks wise there isn’t much different, but Empathy isn’t quite as mature as Pidgin when it comes to themes, protocol support or other.

It does boast second-to-none integration with your Ubuntu desktop and can even support video & voice calls over MSN! 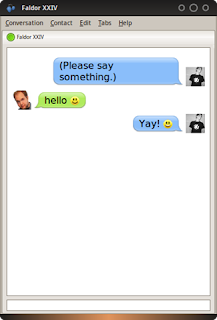 Theme your chats using Adium chat skins, drag-to-arrange your contacts and even share your desktop with people using the newly integrated vino.

A little mentioned new feature in Karmic is the addition of the Gnome-Disk-Utility, also known as Palimpsest Disk Utility 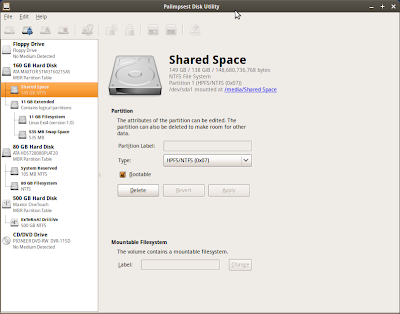 Akin to Apple’s Disk Utility it allows monitoring, management, creation, deletion, etc of your partitions/hardrives. If it detects an error with an installed HDD it will launch a pop up and let you know how to correct it.

How does 2GB of free cloud storage sound? It comes free with Ubuntu thanks to the installation of UbuntuOne, Canonicals’ “Dropbox” competitor. Drop some files into your UbuntuOne folder, sync and then access them from any other computer – anywhere anytime!

You can pay $10/M for an increased amount of space (currently 50GB). It has a cute little icon, too!

Gnome 2.28.1
I hate reading reviews of Gnome releases because very little ever changes on the surface.

This is somewhat true of the latest Gnome version (bar the vastly improved Bluetooth module and the slightly controversial removal of icons on window buttons and certain menu’s. You can re-enable them if you so wish, see my quick how-to here.)

Everything else you think/expect is still there. (Except Ekiga. Ubuntu removed that by default. Mwhaha.)

You’ve heard the hype but see for yourself: Ubuntu starts up faster than ever on most systems. Shutting down takes even less time – typically just a second or two! 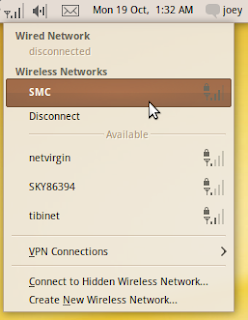 Adding of new WIFI spots and security-key’s has been greatly simplified, and you can even ad-hoc to your heart’s content with this latest version!

Indicator Applet
Like it or loathe it you’ll be pleased to hear that the Indicator-Applet has gained some direction and now works with a greater range of applications in a much more straight forward way. Future plans will extend support from applications as diverse as Liferea, Claws Mail and Kmess to Kopete, Sylpheed and Yarsssr.

Easy Installation Of Fonts
It now takes just one click to install a font in Ubuntu.

Up until now it’s been a bit more drawn out involving copying fonts to a user created directory and then manually rebuilding the font cache. 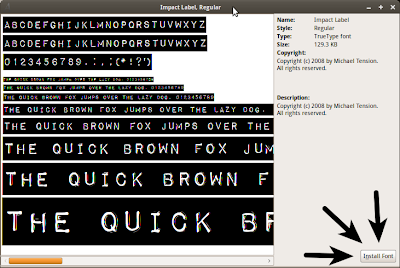 Karmic ships with Firefox 3.5.3 as the default browser.

Rhythmbox 12.5
Rhythmbox remains the default music management/player in Ubuntu – and rightly so! It’s cleanly designed, lightweight (compared to the competition) and actually works with my iPod!

Why not install some cool extra plug-ins for it like desktop art, lastfm recommendations and an equalizer? See my post here.

Computer Janitor (AKA The Duster of Doom)
Computer Janitor has received a make over in time for Karmic, but still remains one of the most dangerous applications available to end users. 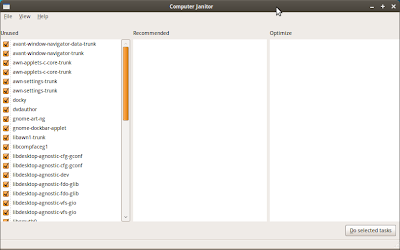 Computer Janitor will happily uninstall/obliterate/cheerfully declare war any manually installed application (those from .debs) seeing them as “unused” or un-needed.

My tip is to edit this from your menu ASAP so you’re not tempted to use it.

In the hands of the extra vigilant it’s a great tool, but Ubuntu Tweak provides a far superior cleaner that doesn’t trash your system.

Software Sources Changes
A great new user-friendly change in Karmic is the support for add-apt-ppa.

It simply means you can add a PPA and no longer worry about fetching a key as this is done automatically.

Or add a PPA to software sources using the new PPA “url’s”. Note that this method doesn’t fetch the GPG Key, but you can use my script to solve that.

Just The Beginning
Of course this over-view is merely scratching the surface of all of the improvements, refinements and changes present in Ubuntu 9.10; a hell of a lot of work has gone on under the hood, too.

Pavel Selivanov I don't care about someone's 'volumes'. I use snaps for…
Why Ubuntu 21.04 Won’t Include GNOME 40 or GTK4