Playing around in Google Search Insights earlier, i punched in ‘Ubuntu’ to see which countries were searching for it most: – 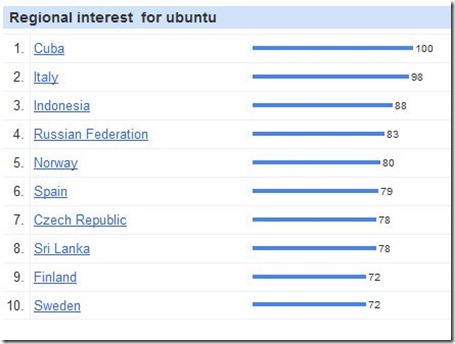 That’s not entirely surprising – Cuba itself launched a version of Fedora called Nova to run on all of it’s Government and state computers with hopes that within a few years 50% of all Cuban computers will run Linux.

I was expecting to see the USA at the bottom at least – but not being an American I’m not too sure how popular Linux is stateside. I know in Europe it’s more prominent and, somewhat, more in the public consciousness. Not entirely, but relatively.

I then wondered about my own country – The United Kingdom – and whereabouts in the country most Ubuntu interest stems from (just for fun, might i add! I’m not proclaiming to be doing some in-depth analysis of Ubuntu usage). Obviously it was skewed towards England (England being bigger and more populous) so i looked at just England: – 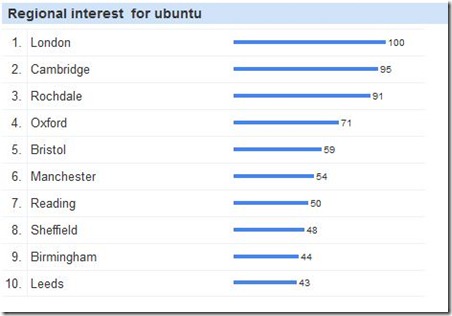 Of course those numbers above represent absolutely nothing but relative ‘search volume’ and I’m sure the actual number of searches for ‘ubuntu’ in those regions was tiny compared to most traffic, but it’s still interesting to get a mini-geographical snapshot of where Ubuntu interest lays!