A new version of Thunderbird, the popular free, open source e-mail client, is available to download for Windows, macOS, and Linux.

And from the off the update makes a great first impression thanks to refreshed app icons and colourful new mail folders.

I know, I know: “new icons” sounds a bit fluffy on paper, but their reality is more impactful. In an app like Thunderbird icons are used everywhere. They’re not there to (just) look good but also convey purpose/intent as clearly and concisely as possible. They’re how people understand the app.

And to my eyes the thinner, colourful icons in Thunderbird 102 their job much much better than the older, bolder ones, as this comparison shows:

Notice anything else in the screenshot above? Thunderbird 102 has a new Spaces toolbar on the left of the (and yes: it is collapsable, incase you’re wondering). This little toolbar makes it much easier to zip around the app.

A single click is all it takes to dive-bomb into your inbox, access the (all-new) address book, cast an eye over your calendars, or quickly open the client’s full roster of settings. You can even change the colour of the spaces toolbar.

Redesigned message headers are another attentive visual touch in Thunderbird 102. Labels have been re-ordered and retooled to highlight important information more clearly. They’re also newly customisable too, so have it!

Other changes in Thunderbird 102 include a hugely improved Address Book, support for the Matrix chat protocol, and improved import/export wizard, and lots more.

Want to try Thunderbird 102? You should be able to install the latest release Ubuntu from the Snap Store or from Flathub in the next few days. Don’t want to wait? You can also grab the binary release available from the official Thunderbird website.

And if these improvements have you excited just wait until you see the major redesign planned for Thunderbird 114 next year — exciting stuff! 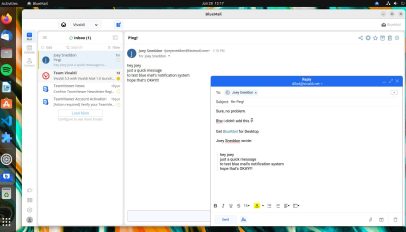 BlueMail E-Mail Client Gets a Makeover, Support for Wayland
Read Next