This is a short post to mention that the new Plex Desktop app for Linux is now available on Flathub.

The proprietary Plex Desktop and Plex HTPC apps made their Linux debut on Canonical’s Snap Store a few weeks back. At the time the media-streaming company said that Flatpak builds would follow in the future.

Well, the future has only gone and blinkin’ arrived!

Yes, Plex’s new Linux apps are now available to install from Flathub. This makes it super-duper simple to get both the new desktop client and its big-screen-friendly sibling up and running on your distro of choice, be it Ubuntu, Fedora, Arch, or, heck, even Hannah Montana Linux[citation needed].

I don’t use Plex so I can’t tell you if the apps are actually any good. However, the marketing and screenshots do suggest they’re pretty decent, and I’m yet to catch sight of any major complaints on social media — so that’s a good sign!

If you do happen to rock a Plex server and/or home theatre set-up you use with it do let me know how these apps fare compared to the ones they replace down in the comments. I’m curious to know if I’m missing out!

You can get both the Plex HTPC on Flathub, and the regular Plex Desktop on Flathub. Do keep in mind that they neither app works well with Wayland, so you may want to log out and select a Xorg session to use them fully. 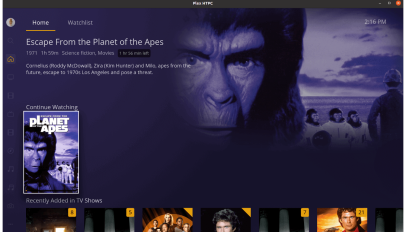 Plex Desktop App Debuts on Linux as a Snap
Read Next