I recently gave my Ubuntu desktop a bit of a makeover using the Qogir GTK theme — now I’m here to show you how you can do the same!

The Qogir theme is based on the terrifically popular Arc GTK theme. This means it works well on a wide range of desktop environments, including GNOME Shell, Unity, Budgie, and Cinnamon.

Accordingly, I reckon Qogir could give even the most dated of Linux desktop a dashing new design, thanks to its modern, flat aesthetic, colourful accents, and unique file manager backgrounds.

The background imagery in the Nautilus file manager (the effect also apparently works with Nemo, but I haven’t tested it) is the most visually striking element in the Qogir theme.

It’s a love it/hate it gimmick, which explains why it’s rarely used. Personally I enjoy the visual flourish it adds (though it certainly helps if your desktop wallpaper compliments it).

Knowing that one style doesn’t fit all the designer behind Qogir, prolific theme maker Vinceliuice, offers the GTK theme in a variety of differing styles.

Vote for your fave GTK themes in our best theme survey!

There are a couple of ways to install the Qogir theme on Ubuntu. The route you take will decide the eventual look.

If you want to install the Qogir theme on Ubuntu with the Nautilus background gimmick (i.e. the mountains) on show, you need to install it using the install script provided on the project Github.

Now, is running random scripts found online generally advised? No, especially when they require root privileges (as this one does). But alas, without the script you won’t get the file manager background as the script has to recompile some CSS in order to display it.

Do take a look at the install script’s contents before you run it to make sure you’re happy with what it does (I was; it’s fairly straightforward).

Download the .zip above, extract, and then cd into the resulting directory to run the script (which needs root permissions).

The script installs 6 versions of the Qogir theme: light, dark, and standard (mixed) with round window controls, and the same set again but with square ‘windows’ style controls.

If you prefer to install GTK themes the old fashioned way (nothing wrong with that) or you don’t particularly care for the ‘mountains’ effect, you can download Qogir from gnome-look.org in whichever variant(s) you want:

To install, extract the tarball using file roller (or another tool) and copy the root theme folder inside over to the hidden ~/.themes directory in your home folder.

If the theme folder doesn’t exist, go ahead and make it — just remember to type the period!

However you install the Qogir theme you’ll need to switch to it before you can see it. On Ubuntu and GNOME Shell systems you can use the GNOME Tweaks utility to switch GTK theme from your current theme to the new one. The change takes effect instantly.

And that’s it — you should now be staring at a striking new desktop style. Let me know what you think of it in the comments! 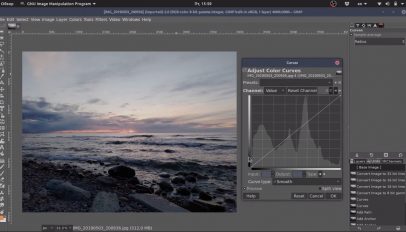 GIMP 2.10.12 Released with Bug Fixes, Other Improvements
Read Next