Downloads of LibreOffice 6.2, billed as a ‘significant major release’ of the popular free office suite, are now available.

Headline changes in the LibreOffice 6.2 release include a ‘radical new approach to the user interface’ (albeit optional), new capabilities in Writer, Calc and Draw, and improved compatibility with Microsoft Office files.

For more details read on. 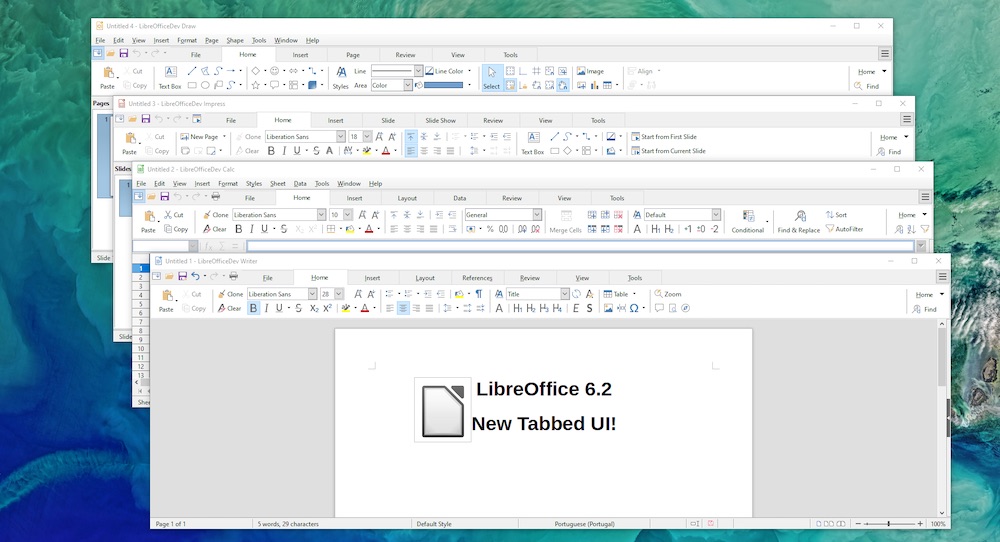 The new LibreOffice NotebookBar UI is now available out-of-the-box as an optional extra, having been included as a hidden experimental feature in the past few releases.

The NotebookBar UI is available in three styles: Tabbed, Groups, and Contextual. Each one has a different menu and button layout. The ‘Tabbed’ option is most similar to the famed Microsoft Office Ribbon UI.

Users wanting to try the NotebookBar UI can do so by heading to the View > User Interface menu and selecting one of the three NotebookBar layouts.

Anyone not a fan of these layouts needn’t panic as the standard toolbar layout remains the default user interface.

LibreOffice 6.2 features “substantial changes and improvements” to its default icon themes, with particular attention paid to the Elementary and Karasa Jaga icon sets.

LibreOffice 6.2 also ships with three SVG based icons styles as an ‘experimental feature’. This will greatly improve the ‘sharpness’ of toolbar icons on HiDPI displays.

The context menus of each app in the LibreOffice suite has been reworked and tidied up. Context menus are more consistent between apps, aiding usability and improving muscle memory.

As always, there’s better file compatibility with Microsoft Office documents including older versions of office file formats that are no longer used by Microsoft.

LibeOffice 6.2 improves the help system by filtering index keywords faster; signature lines can now use an image of a handwritten signature; and the LibreOffice personalization dialog is leaner and more stable, giving users the choice of picking one of several themes.

Alongside all of that those who upgrade to LibreOffice 6.2 will also benefit from a healthy batch of bug fixes, performance improvements, and the general spit and polish a new release brings.

For more details check out the comprehensive LibreOffice 6.2 release notes on The Document Foundation’s wiki.

LibreOffice downloads are, as always, available from the project website, the latest release being no exception. LibreOffice installers for macOS, Windows and Linux are provided.

The LibreOffice PPA typically provides updated versions of LibreOffice for Ubuntu 18.04 LTS and later releases. As of writing the PPA has not been updated with packages for LibreOffice 6.2, but you can add it now in anticipation:

Ubuntu users can also install LibreOffice 6.2 as a Snap appand as a Flatpak. The benefit of using these versions of app is that it can be installed alongside the regular repo version of the suite, rather than replacing it.

As of writing the LibreOffice 6.2 release has yet to be promoted to the stable channel in the Snap store, but it is available as a Flatpak app via Flathub: