A new version of the open-source audio editor Audacity is available to download.

The update also introduces the ability to customize themes support, meaning advanced users can tinker about and craft a UI that suits them best. 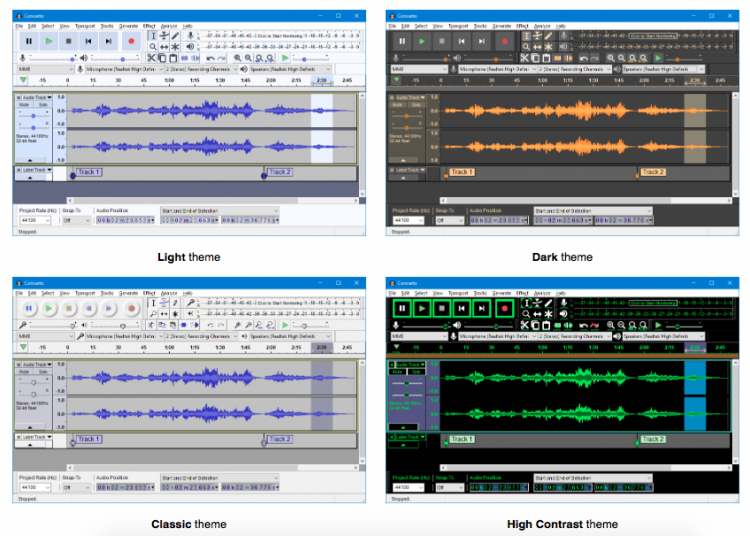 Audacity 2.2.0 features improved menus. The bulk of app menus are shorter than in previous versions as developers have opted to simplify and reorder the options (though retaining full functionality).

New menu items have also been added. For example, you can now export as MP3 or WAV directly from menus without having to export sound and select a format.

Audacity 2.2.0 introduces a new default recording mode. When triggering record Audacity will record at the end of the currently selected track by default (i.e. append rather than start a new track). The old record behaviour is still available.

MIDI Support in Audacity & Other Changes

This release makes it possible to import and play MIDI files in Audacity directly. This support works ‘out of the box’ on Windows systems. Linux users will need to install a supported software synthesizer like TiMidity++ and freepats.

Finally, the latest version of this hugely popular digital audio editing software features 198 bug fixes, an updated manual, and (for those on it) full support for macOS 10.12 Sierra and macOS 10.13 High Sierra.

For further details on Audacity 2.2.0 see the official release notes or the updated manual.

You can install an older stable release of Audacity from the Ubuntu Software app:

To install the latest version of Audacity on Ubuntu with all the features mentioned in this post you will have to head outside of the regular repos.

The Audacity team maintain an official daily builds PPA built from Git for Ubuntu users. However, this PPA isn’t meant for general purpose use.

Audacity is also available from Flathub but this is not, at the time of writing, the latest release.

So, to install Audacity 2.2.0 on Ubuntu 16.04 LTS or later, you can use an unofficial PPA maintained by PandaJim:

You can try the new themes out from Audacity > Preferences > Interface > Theme.