Firefox 57 is now available to download — and it’s probably the single biggest update to Firefox in the browser’s 13 year history.

So big are the changes on offer that Mozilla has given the release its very own name: ‘Firefox Quantum‘.

A fitting title for such a fit release. As you’ll see, Firefox 57 is a quantum leap over the one we all thought we all knew…

There are 3 major changes in Firefox 57 that make it better, faster and stronger:

Let’s take a closer look at each point. 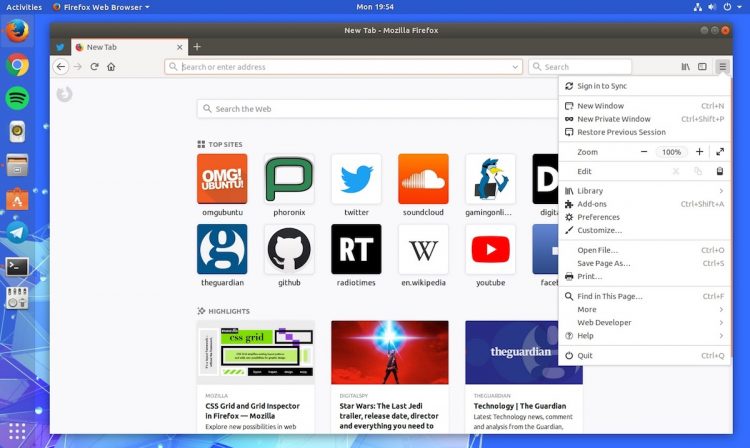 Quantum gives an all-new look and feel to Firefox. The angular visual refresh, dubbed Photon, is clean, light and responsive.

Alongside the squared tabs, redesigned toolbar icons, and revamped menus is one striking change: a combined, centre-aligned address & search bar.

I got used to it after a few minutes. Once you get used to the “newness” it recedes into the UI, allowing you to focus on the contents of tabs instead go the Chrome around it. If you don’t like this change you can (pictured above) return to the separate address bar and search box.

The Photon refresh extends to virtually every part of the UI, form the spacing of menus and the color of toolbar icons to transitions and tab loading animations

A couple of new features are introduced as part of the Photon rejig, including a new “Firefox library” (a menu giving quick access to browsing history, bookmarks, Pocket saves, and synced tabs); “Screenshots” (which does what it says on the tin).

There’s a a totally redesigned new tab page. it makes far more efficient use of space than the old “speed dial” approach, and surfaces some helpful “highlights” from recent web searches and articles being shared on Pocket.

Talking of which, the Pocket save button has been moved out of the toolbar and into the new combined address/search bar.

‘Firefox is 2x as fast as this time last year, and uses 30% less memory than Google Chrome’

According to the bods at Mozilla Firefox Quantum is 2x as fast as last year’s Firefox 49, and uses 30% less memory than Google Chrome.

“Over the past seven months, we’ve been rapidly replacing major parts of the engine, introducing Rust and parts of Servo to Firefox. Plus, we’ve had a browser performance strike force scouring the codebase for performance issues, both obvious and non-obvious,” explains Mozilla’s Lin Clark in a (thoroughly excellent) write-up.

All of the changes create an effectually new Firefox.

For many, the biggest change in Firefox 57 won’t be the sleek new interface, or the invisible under the hood tune-ups, but the fact that many much loved Firefox add-ons will no longer work with the browser.

For the best part of a year Firefox has allowed you to run both legacy add-ons and the new-fangled web extensions side-by-side. With this release that ends; legacy add-ons no longer work in Firefox 57.

Add-on developers have had a long, long time to prepare for this day. A such a slew of popular add-ons are already available as Web Extensions (hurrah).

You can view a list of web extensions that work with Firefox 57 here.

You may find that one of two of your favourites haven’t been updated and, as such, won’t work in the new release. Alternatives may be available.

Firefox Quantum is just the start

If this post seems overly positive it’s because it has reason to be. Firefox 57 is a monumentally important release for the Firefox project, for Mozilla, and for open-source software in general.

The best part is that none of this is hyperbole: Firefox 57 really is better, faster, stronger. These improvements are tangible. The new combination of change here blasts some air back in to this flagship open-source project’s sagging sail.

Right now, Firefox feels in better shape than a long time and I, as someone who instinctively clicks the colorful Chrome logo when I want some internetz, am super impressed.

Whether this release sways you back to Firefox full-time or not, competition is healthy. Google won’t be oblivious to the praise the resurgent Firefox is getting. It will have improvements of its own to debut, I’m sure.

A new Firefox emerges today, and the improvements on offer serve as one heck of a foundation on which to build on.

So that’s the skinny on why you may want to give the latest release a spin for yourself. But how do you get Firefox on Ubuntu?

Well, that depends. If you’re using Windows, macOS or Linux you can download Firefox 57 from the Mozilla website later today, or upgrade an existing version by going to Firefox > About and clicking the update button.

The latest stable release is also already available to download from Mozilla’s FTP servers (the impatient route) and the main Firefox website.

Ubuntu users get an automatic upgrade to Firefox 57 on supported versions of the distro (which includes Ubuntu 14.04 LTS, 16.04 LTS and the latest Ubuntu release, 17.10).

Open the Software Updater tool, select Firefox, and hit continue to get it right now.