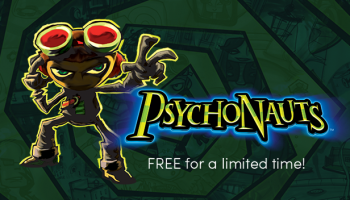 I can’t think of a single Linux gamer who doesn’t own a copy of indie platforming hit Psychonauts.

But if you happen to be that rare outlier this is you chance to grab a copy — and for free!

Yup, the game, a staple part of many a Humble Bundle, is being given away gratis as part of the Humble Store’s ‘end of summer sale’.

But you’ll need to be quick.

While you can snag a free copy of Pyschonauts right now the offer is only valid for the next day or so.

This offer has now expired — well done if you got it!

Psychonauts — What is it about?

Developed by Double Fine, Psychonauts is a platform game in which you play as a psychic kid  — Razputin “Raz” Aquato — who runs away to train to become a psychic spy only to uncover more than he bargained for etc and so on.

We reviewed the game back in 2013, praising its humorous dialogue and fun gameplay.

Psychonauts has gone on to become a real cult favourite among gamers, particularly those who enjoy indie titles. And despite some initial sales drama the game has secured itself a sequel. Psychonauts 2, an official bona-fide follow up, is due for release next year.

So, here’s your chance to see what the fuss and favouritism is about — and it’ll cost you absolutely na-da, a saving $10 or so on the usual Humble Store price.

Head over the Humble Store to grab your free copy. You get both a Steam key and DRM-free downloads for Windows, macOS and Linux.

Get Psychonauts from the Humble Store