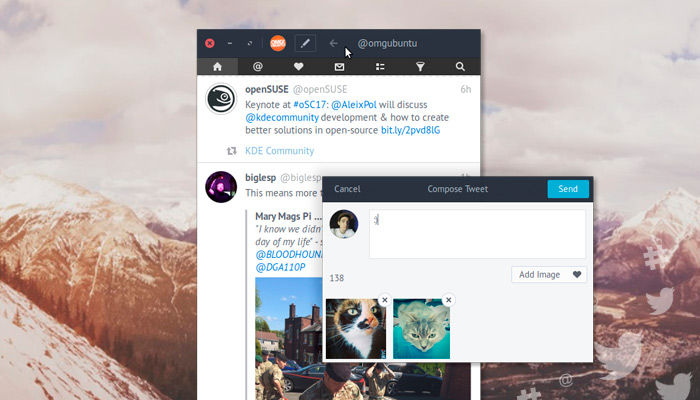 Avid user of Linux Twitter client Corebird? Well, you may want to know that a new release is available to download.

But before you get too excited about finding new features I should point at the latest release comes with stability improvements and nothing else.

That’s okay; bug fixes and stability tweaks are just as important. And although I can’t say that I find Corebird 1.5.0 particularly crashy, if you do it will be worth your time upgrading.

To install Corebird 1.5.1 on Ubuntu you’ll need to either build it by hand from source (available on Github) or use a pre-built package.

The method you choose to install the app will depend on your current Ubuntu set-up, your package management preferences, and what GTK theme you use (no, really).

3 Ways to Install Corebird on Ubuntu

Pandajim maintains Corebird packages in a dedicated Corebird PPA. Although this PPA is “unofficial” it is probably the easiest way to get up-to-date Corebird on Ubuntu 16.04 LTS and above that both looks and works great.

A Corebird Snap is also available. Again, this is an unofficial build but works fine. The only drawback is that it uses the Adwaita GTK theme by default.

Finally, a Corebird Flatpak is available via Flathub. This is an official package and, with a corresponding Flatpak GTK theme installed, the app will integrate nicely in to your existing desktop set-up.

Assuming you have the latest version of Flatpak installed on your system (Ubuntu users should add the Flatpak PPA) you can go and head install Corebird Flatpak by running these commands:

Pay attention to the terminal during the installation of the Flatpak as, most likely, you will be prompted to install the GNOME runtime.