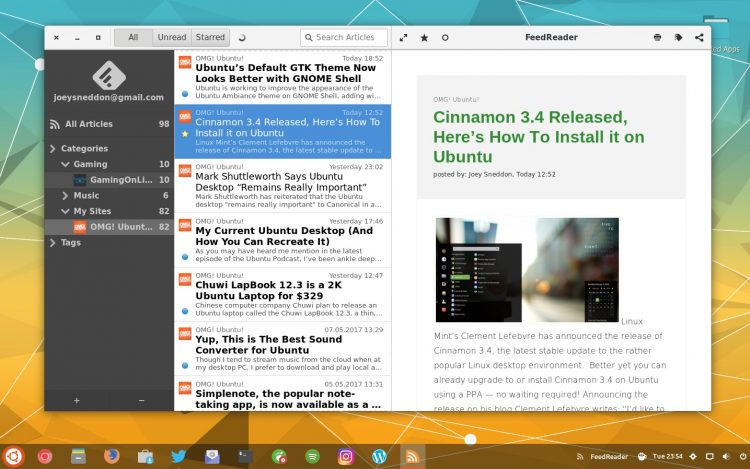 Many people still read the news from RSS feeds, using services like Feedly, Feedbin and Old Reader to fetch, read and sync content between devices – myself very much included.

Feedreader is a desktop RSS reader for Ubuntu and other Linux desktops. It has a clean, straightforward design with a three-panel layout.

Feedreader can sync with a range of RSS services, ensuring that unread items sync between devices and across apps:

Articles you read or favourite in one app, like FeedReader, will be marked as read or starred in other RSS apps you may use, and vice versa.

If you don’t need syncing capabilities you can also use Feedreader as a standalone local RSS reader too.

Beyond the front page there are some other headline features, including  an automatic content parser (think ‘Readability’), a helpful ‘unread only’ option, and a choice of themes and font sizes.

The layout of the app reminds me of Lightread (which sadly died along with Google Reader). It also feels more modern and integrated into the GNOME desktop than the venerable Liferea.

Interested in trying it out on Ubuntu? Read on to learn how.

How to Install Feedreader on Ubuntu

Although not in the package archives it used to be easy to install Feedreader on Ubuntu using a PPA. That PPA is now defunct, and early effort to create a Snap package stalled.

So you’ll need to turn to Flatpak to install Feedreader on the Ubuntu desktop.

Flatpak is a bit more of a faff than Snaps or AppImages because they rely heavily on other bits, like portals, runtimes and remotes. Snap and AppImages avoid this by bundling everything you need with ’em which leads to duplication, sure, but it is at the benefit of simplification.

As I don’t know which runtimes or portals you have enabled or installed on your system the instructions below assume that you’ve never installed a Flatpak before.

If you’re on Ubuntu 16.04 LTS or 16.10 you need to first add the official Flatpak PPA to your software sources. This is to ensure you’re using an up-to-date version of Flatpak with all the latest features and fixes.

If you’re on Ubuntu 17.04 (or once you have added the Flatpak repo above) you can run this command to install everything you need to install Feedreader:

Finally, run this command to add and install Feedreader from the official Feedreader Flatpak repository:

The important bit here is that you pay attention to the terminal after running this command. You will be prompted to add the GNOME remote that is required to fetch the GNOME runtime that Feedreader needs to run.

Hit ‘y‘ to okay this and then wait while ~120MB is downloaded and unpacked, and Feedreader is set-up.

Once install is complete you should find an app launcher for FeedReader in the Unity Dash, GNOME Applications overview or whatever app menu or launcher you use. I had to restart GNOME Shell to see the launcher appear, so if you don’t see it after a few minutes, give that a try.

The first time you run Feedreader you’ll be prompted to login/set-up an account: 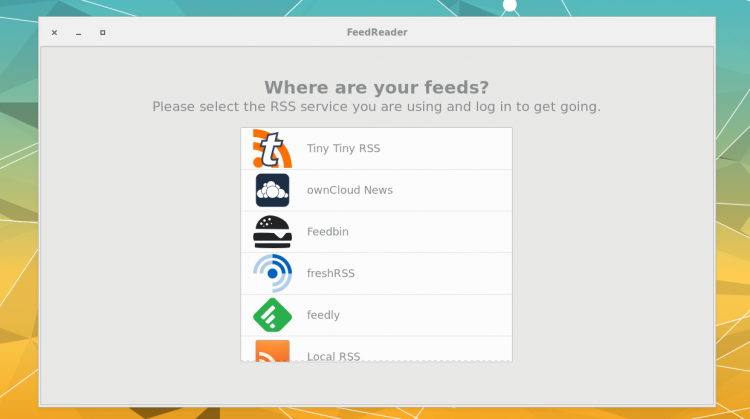 Select your feed service from the list and login and/or authenticate as prompted.

To use the app without an account select ‘Local RSS’ and use the ‘+’ in the lower left-hand sidebar to manually add RSS feeds.

Initial sync can be painfully slow depending on the service you’ve connected to.

My initial Feedly sync took over 45 minutes because the app insists (by default) on downloading the “full content” for 400 posts — despite the fact I only had 80 unread articles.

Once the initial sync is complete you can dive into the application’s settings dialog to change this setting (recommended) as well as configure how often the app should check for new articles in your feeds.

Now, here’s where I have a nitpick. You can only set the app to check for new items for increments from 5 minutes –  60 minutes. I think an “only check for new articles on launch” option would be worth adding; I don’t actually want to keep a sync process running in the background at all times.

As we’ve mentioned before, Flatpak apps do not use your GTK theme by default. There are workarounds for this, and Flatpak devs are working on “fixing” the issue properly. But, for now, on Ubuntu, you’re stuck staring at the spacious Adwaita, the default GNOME theme, in all Flatpak apps — both on Unity 7 and under GNOME Shell.

Fonts also seem rather large and do not respect my system settings. It might just be me, but everything about Feedreader looks huge, too — fonts, buttons, padding.

The app will look nicer under Mutter/GNOME Shell than Compiz/Unity (e.g., drop shadows, rounded corners) something you may want to keep in mind.

Home » Apps » How to Install Feedreader RSS Reader on Ubuntu