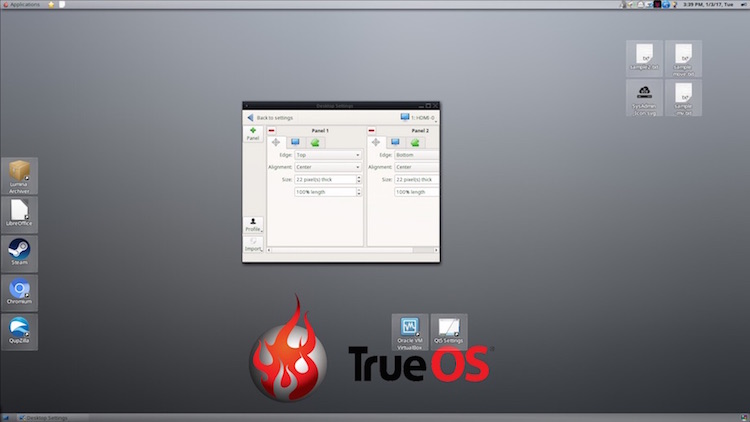 Lumina 1.2.0 is described as an “enhancement to the current desktop” and includes new panel and menu plugins, an independent theme engine, and updates to its set of core desktop apps.

“[This year] is already shaping up to be another big year for Lumina with things like the new window manager on the horizon,” the team says in its release announcement.

What Is Lumina Desktop?

Unfamiliar with Lumina? No surprise. Open source is home to a diverse (and sometimes not so diverse) array of desktop environments. It can be a difficult task to keep up with them all (which is why you read us, right?).

To quote our article on the Lumina 1.1 release: “[Lumina] is targeted at BSD rather than Linux systems [and] is based on Qt5 (sans QML) and the Fluxbox window manager. It uses a modular, plugin-based approach to the entire interface, allowing the desktop to fine-tuned and tweaked to suit each individual user.”

Although designed for BSD Lumina can be compiled for and used on almost any Linux distribution, including Fedora, Arch and — faux shock — Ubuntu.

The new Lumina Archiver utility debuts, and offers a GUI front-end to the familiar Tar package.

Also new is what Lumina refers to as “pre-defined profiles for system interface configurations”. In less technical terms these are “different desktop layouts“, and this release includes pre-set styles for macOS, GNOME 2, Xfce, and Windows.

Keep in mind that these desktop layouts are approximations rather than pixel-perfect reproductions. The aim is to help ‘users of these other systems can feel “right at home” with Lumina.’

Elsewhere in Lumina 1.2 are improvements to many of its core application set, including the calculator, file manager, screenshot and desktop search apps.

Want to install Lumina desktop on Ubuntu 16.04 LTS or later? Well, you can — but you’ll need to compile it by hand.  Thankfully the Lumina website has a pretty thorough guide on how to do this.

If you’re last you can also use a third party PPA maintained independently of the Lumina project (and thus not official). This PPA has not, at the time of writing, been updated with packages for the Lumina 1.2 release.