Although some of us used the Christmas break to rest up and relax, some software developers used the downtime to polish off and push out new releases of popular apps.

Among the applications updated over the Christmas period was open-source video convertor Handbrake, and the tasty new GNOME Recipes app.

The updated apps boasts a refreshed set of official conversion presets. These are designed to cater for “broad compatibility” and include new hardware/device presets (updated for recent hardware/devices) and new web presets for video targeted at web sites like YouTube, Facebook, and so on. For Matroska (MKV) fans there’s a new MKV preset which includes VP9 video with Opus audio.

If you found you got great results with the app’s older presets you won’t miss out. All presets from HandBrake 0.10.x are still included. You’ll find them listed under “Legacy”.

To accompany the release there’s a fresh set of official HandBrake Documentation to view online (albeit in beta, and English only).

Handbrake 1.0.0 is available for Windows, macOS and Linux and can be downloaded from the Handbrake website (the only official source for the app, so avoid other downloads).

The official Handbrake stable PPA is maintained by Handbrake developers to enable Ubuntu users to install the update quickly. 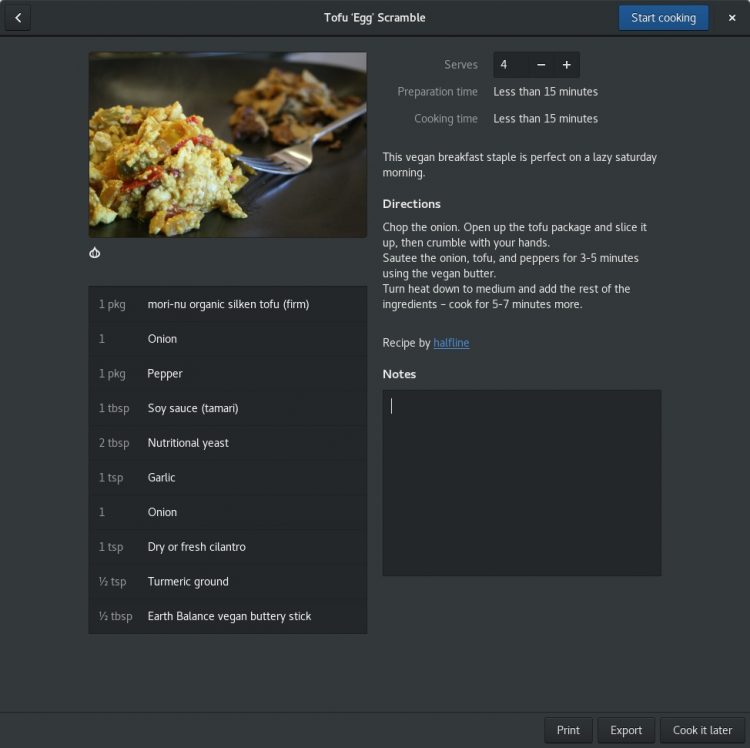 GNOME developer Matthias Clasen serves up a fresh batch of improvements in his GNOME Recipes app.

Clasen says that users editing or adding ingredients in the latest version of the app will find a ‘…popover [that] provides suggestions for both ingredients and units, while still allowing you to enter free-form text’ — nifty!

The next big feature addition for the app is the ability to share recipes available within it via e-mail.

See our previous article on GNOME Recipes for information on installing the app via Flatpak.

The Electron-based Harmony music player scored itself a small update this winter holiday. It introduces an animated “refresh” button to the sidebar, supports more than 25 tracks in Deezer playlists, and fixing an issue with liking tracks on both Deezer and Soundcloud.

Harmony is a cross-platform open-source app available for Windows, macOS and Linux.

We featured this neat way to bring lyrics back to Spotify just before xmas, so it’s great to see the app add some neat new features so soon.

The settings page lets adjust refresh rate, font size, and colour scheme (light mode or dark mode, the latter of which now sports blurred artwork too). You can also check a box to ‘Keep Lyricfier always on top’ if you’re super obsessed with singing along!

One other minor change of note: you’ll notice a link to the source of the lyrics displayed at the bottom of the window. This is super handy for those occasions where you spot a mistake in the lyrics and want to submit a correction.