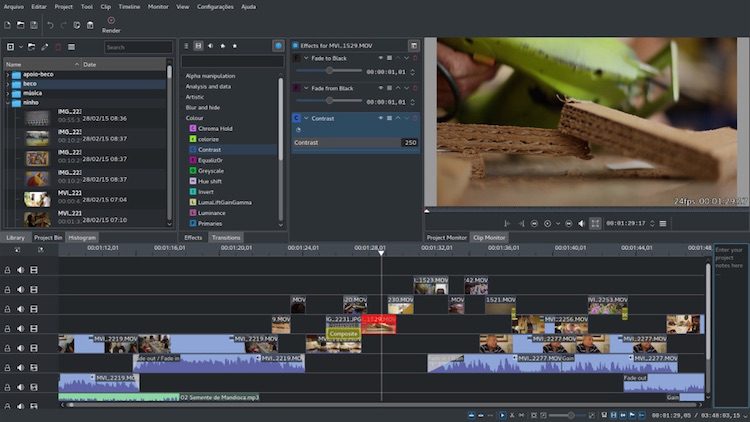 Kdenlive is one of the most popular open-source video editors around, and its latest update, which arrived late last week, will do much to enthuse its ardent fanbase.

Take the addition of three-point editing, which is new in Kdenlive 16.08.0. This commonly used editing method by digital videographers has a rep for being confusing.

But in practice it speeds up inserts or replacing a timeline/clip section with a specific clip you want exactly where you want it, as Webopedia’s definition explains:

“Three-point editing allows you to insert a clip from the source media into a destination track, which is done by setting three edit points:

Making 3-point editing possible in Kdenlive is a fully-functioning ‘insert mode’. This feature lets you drag and drop clips onto the timeline and have existing clips automatically move to make room for it.

Another big boon in this release is support for effect rendering in the timeline.

This is super-duper useful if you make a video with a bunch of effects and transitions that you want to play back in real time. Much like Apple’s Final Cut, Kdenlive lets you pre-render parts of the timeline so that it can be played back in real time (vital for spotting those slightly mis-timed transitions to cuts).

Better still, Kdenlive pre-renders in the background, leaving you able to work on other parts of the timeline.

One of the oft-criticised areas of all Linux video editors is a lack of stability. Kdenlive 16.08.0 features 370 bug fixes and code commits with regards to crashes, bugs and other various improvements to the title tool, DVD wizard, and audio mixing.

Other notable changes in this release:

A Windows port of Kdenlive is underway, and a MacPorts team is working hard to get the app up and running on macOS.

If you’re running Ubuntu 16.04 LTS you can install Kdenlive 16.08.0 via the project’s official stable release PPA:

Once installed launch from the Unity Dash (or equivalent app menu).