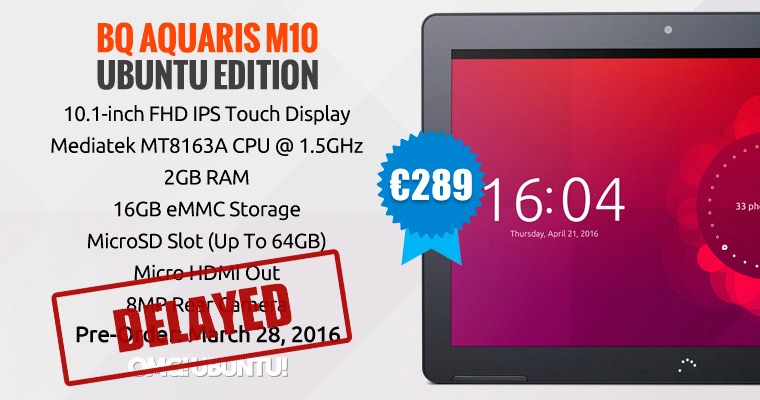 If you did you may be expecting the postman to come rat-a-tat-ing on your door this week.

Well, don’t panic when he doesn’t.

Bq has quietly pushed back the shipping estimate of the world’s first true Ubuntu tablet by one week.

Updating shipping information for both HD and FHD models of tablet on its website, Bq say “Deliveries will take place starting from the second half of April“.

The website previously told customers than “Deliveries will take place starting from the second week of April” (emphasis ours).

Either way it’s not huge delay but a delay nonetheless.

So, if you pre-ordered the tablet on the assumption you’d get it this week this is us telling why you’ll be waiting a little longer to get a dispatch notice.

The delay was pointed out to us by reader Jack F., who explained in his e-mail

“I pre-ordered the BQ tablet thinking that deliveries would take place second week of April. BQ have changed this to second half on their site without notifying via email it would be delayed. Would be good for other customers to know.”

Jack F. has been in contact with Bq customer service again. He provides us with this update:

“BQ customer service and although they could not give a specific date, they informed me that the deliveries for the tablet are not to start for another 3-4 weeks.”

At worst, an added 4 week delay will see the tablet arrive more than one month later than planned. For customers like Jack, who ‘had hoped to receive it before leaving home for two weeks’, it’s easy to feel aggrieved:

“I can accept [that shipping dates slip] but altering the dates without notifying customers who are paying good money for this product isn’t the best way to maintain a good customer base. I just feel slightly misled.”

Let’s hope there are no further delays.

Bq say there will be no delay, and that the original estimate of ‘second week of April’ was a mistake and should’ve always read ‘second half’ of April.