The Ubuntu conferences of yore are set to return next year with the first UbuCon Summit on 21–22 January 2016.

The in-person conferences were supplanted by the Ubuntu Online Summit back in early 2013. The goal was “to open the opportunity for those to participate who cannot travel physically to the event.”

For those of us who are students, working with too tight a budget, or simply can’t find the time, having a more accessible conference has been a great boon. Nonetheless, the spark that comes from face-to-face interaction with the large and enthusiastic Ubuntu community has been missing. I had the great privilege of attending my first in-person conferences this year (shout out to Scala Days) and there’s nothing quite like meeting people who share the same love and passion for something that can so easily alienate us from one another. 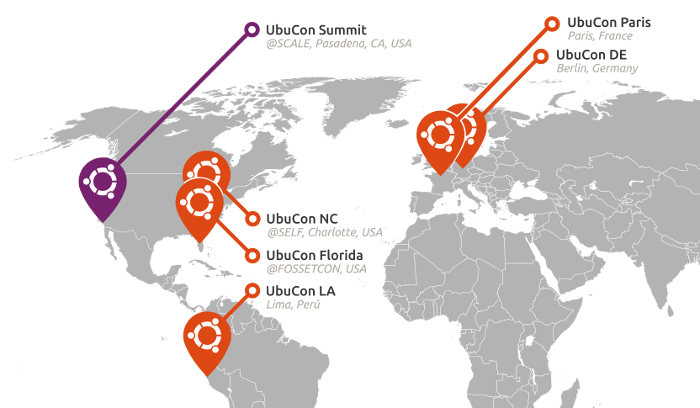 UbuCons are volunteer-run conferences that have taken place all around the world and often alongside other large tech conferences, including FOSSETCON in Florida, SouthEast LinuxFest (SELF) in the Southeastern United States, and SCALE in Southern California.

The UbuCon Summit builds on top of the work of these incredible volunteers to bring together “a bigger multi-track, multi-day event to learn, share and collaborate around Ubuntu as a project.” The conference will feature talks from Mark Shuttleworth, Elizabeth K. Joseph, Jorge Castro, Jono Bacon, and many other familiar faces.

While the UbuCon Summit brings back the in-person nature of the old UDS, its scope is much broader than just the developer community. As Jono Bacon puts it, UbuCon Summit “is designed for a much wider demographic: users, developers, artists, educators, partners, businesspeople, and more.” And the talks on everything from career building to convergence, Juju to gaming reflect the widened focus.

The conference will feature two tracks: one focused on users and the other on developers. The former will be focused on “the non-tech, day-to-day part of using Ubuntu” while the latter will focus on “app development, IoT, convergence, cloud and more.”

UbuCon Summit is being held in Pasadena, California on 21–22 January 2016.

The best part? It’s free! The conference is taking place alongside SCALE, the Southern California Linux Expo. SCALE isn’t free, but you can use a coupon code on the UbuCon Summit site to get 50% off the full access pass (note: you’ll still be able to attend UbuCon Summit without a SCALE pass).

So if you’re in town for SCALE, register for the UbuCon Summit and hang out with some familiar faces in the Ubuntu community. If you’re planning to head to LA for the UbuCon Summit, snag a SCALE pass for half off and check out talks on Postgres, Akka, ZFS and btrfs, and much much more.

Can’t make it? I’ve been informed that the keynotes and lighting sessions will be streamed and possibly recorded, so we’ll have coverage of and links to the available talks when the Summit rolls around.

Head to the official UbuCon Summit site for more details on travel info, hotel reservations, and the full schedule.