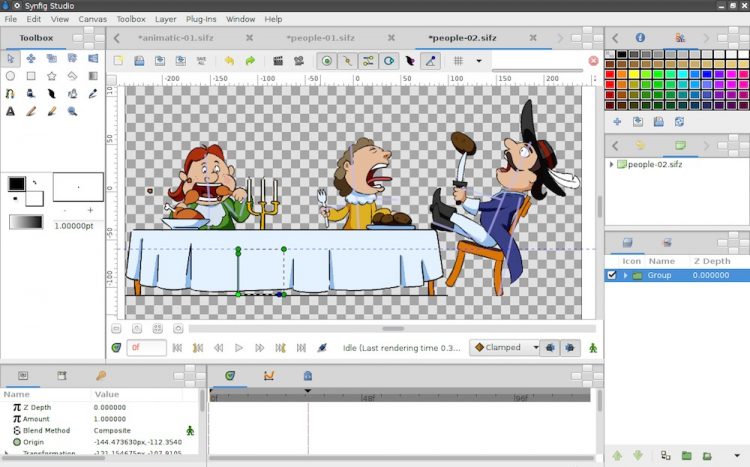 The first release of the cross-platform software in well over a year, Synfig Studio 1.0 builds on its claim of offering “industrial-strength solution for creating film-quality animation” with a suite of new and improved features.

Among them is an improved user interface that the project developers say is ‘easier’ and ‘more intuitive’ to use. The client adds a new single-window mode for tidy working and has been reworked to use the latest GTK3 libraries.

On the features front there are several notable changes, including the addition of a fully-featured bone system.

This joint-and-pivot  ‘skeleton’ framework is well suited to 2D cut-out animation and should prove super efficient when coupled with the complex deformations new to this release, or used with Synfig’s popular ‘automatic interpolated keyframes’ (read: frame-to-frame morphing).

New non-destructive cutout tools, friction effects and initial support for full frame-by-frame bitmap animation, may help unlock the creativity of open-source animators, as might the addition of a sound layer for syncing the animation timeline with a soundtrack!

Synfig Studio is not a tool suited for everyone, though the latest batch of improvements in this latest release should help persuade some animators to give the free animation software a try.

If you want to find out what open-source animation software is like for yourself, you can grab an installer for Ubuntu for the latest release direct from the project’s Sourceforge page using the links below.

Elias Autio Can someone explain, why there is the extensions dot gnome…
Major Update: GNOME 41 Released with New Multitasking Settings, Revamped Software, and More

Guy Clark The Ubuntu version of Gnome 40 is far superior.... In…
Download Now: Ubuntu 21.10 Beta Released, This is What’s New