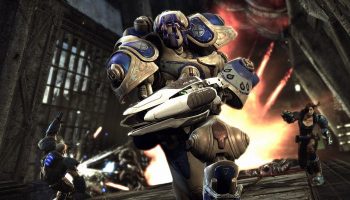 The next instalment of Unreal Tournament, the acclaimed first-person shooter video game series made by Epic Games, will be available on Linux.

The news comes just weeks after initial Linux support was announced as part of Unreal Engine 4.1, the engine powering the game.

Development on Unreal Tournament 4 will start from scratch with a focus on Linux, Mac and Windows. Unreal  caution that it “will take many months until the game is playable by gamers” but that when the first alpha arrives it will be available for free.

Yeah, you read that correctly. The team says that the game will be free — and not simply ‘free to play’, either.

Development on the game will happen in the open on GitHub as part of a collaboration between Epic, fans of the title and developers of the Unreal Engine.

Epic’s plan is to create a ‘a marketplace where developers, mod makers and gamers can give away, buy and sell content’, they say. Earnings will be split between them and the content creators.

“That’s how we plan to pay for the game.”

For more information on what’s planned, for whom and by when, head over to the Unreal Wiki page.