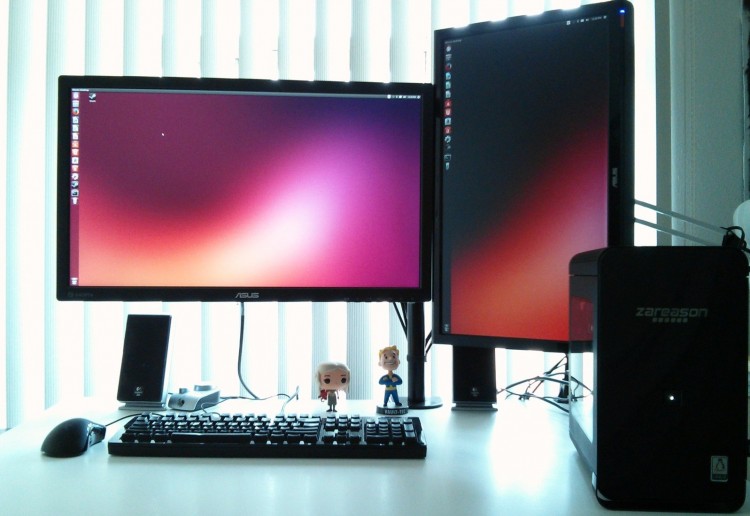 If you’re a Linux gamer, but don’t have enough space in your room to house a gigantic gaming rig, ZaReason has you covered.

The Zeto is Linux-friendly vendor ZaReason’s compact gaming PC that packs a lot of power into a one foot high and 12.1-inch deep form factor. We got to spend a few weeks over the holiday playing with the Zeto and seeing what all ZaReason could pack into such a small footprint.

The test device provided to us was mostly a base configuration with additional RAM and a graphics card bump:

It’s hard to overstate just how small, light, and quiet the Zeto is. My own desktop rig is about three times as large, twice as loud, and as heavy as an anvil compared to a PC that can fit comfortably on my desk.

The form factor is thanks to ZaReason’s choice of case: the EVGA Hadron Air. The Hadron Air is a svelte mini-ITX case that houses a 17cm x 17cm motherboard and ships with its own slim 500W 80 Plus Gold PSU and space for a single slot-loading drive.

The Zeto has a sleek, reflective front with a single power button and ZaReason logo. The left-side of the case is see-through whilst the right features a slot and eject button for your optical disc drive, microphone jack, headphone jack, and two USB 3.0 ports.

If you’re planning on adding or swapping hard drives, there’s room for a total of two. The case uses tool-less hard drive trays that make it easy to snap a new drive into an enclosure and slide it into place.

The case does present a number of limitations. Though there are grommets for hoses, ZaReason doesn’t offer a water cooling configuration for the Zeto. And if you glance at our photo of the inside, you’ll quickly realise there’s hardly room for the wiring that already exists, let alone additional piping for extravagant water cooling configurations.

If you’re still dependent on physical media, the Hadron Air case only has a single optical disc slot which requires a slim slot-loading drive from EVGA or a handful of manufacturers.

And though the Zeto is only a foot high, the case vents air to the top, so be cautious if you’re short on vertical space or typically pile on peripherals or junk mail on top of your PC case.

Out of the Box Experience

It’s all good news if you’re concerned about drivers or connectivity.

Extra drivers? None! Stock Ubuntu supports the Zeto’s hardware perfectly. Everything from WiFi to the Nvidia GTX 760 work with open source drivers out of the box.

But since the Zeto is also a gaming rig, odds are you’ll be replacing the open source Nouveau drivers with Nvidia proprietary drivers. Rest assured, both work great out of the box and with multiple monitors to boot.

Since the Zeto doesn’t rely on any proprietary or vendor-specific drivers, installing other distributions is a cinch. In our testing, the recently released Fedora 20 worked perfectly as well. Indeed, whilst Ubuntu 13.10 is the default distribution offered, ZaReason can preinstall Fedora, Mint, Debian, OpenSUSE, or a number of Ubuntu flavours.

Once you’ve got your favourite distribution up and running, connecting all your peripherals should be simple with:

My only concerns would be with the lack of Thunderbolt and FireWire connectivity, but the former is still rather new and the latter should be less of an issue with plenty of USB 3.0 ports.

Our review model also came with blue LEDs that light up the inside of the case when in use. As someone who usually cuts LED wires on gaudy peripherals and case fans, I was relieved to find a physical off switch on the back of the case. It’s great if you like staring into your case whilst Steam downloads a game, but even then, $25 seems a bit steep.

Though the Zeto sat a foot away on my desk, it was hard to tell it was even on.

It’s hard to say much else about using the Zeto, but that’s the biggest endorsement I can think of. Though the Zeto sat a foot away on my desk, it was hard to tell it was even on. Blaring LED lights aside, the quiet hum and solitary white light on the power button is all that gives away the Zeto’s active state.

ZaReason offers a number of Intel Core i3, i5, and i7 processors for the Zeto ranging from the i3 4130 to the i7 4770K. Though in the past the Core i3 line was notable for its lack of hyperthreading, the Haswell i3s available for the Zeto all include the feature.

The Zeto’s standard Seagate “SSHD” couples a standard hard-disk drive with features of a solid-state drive to (ostensibly) provide some of the speed benefits of SSDs with the lower cost of everyday HDDs. In practice, I can’t say I noticed much of a difference, but your mileage may vary. ZaReason also offers SSDs from Crucial and Intel if you’re willing to pay more for the solid performance boost of normal SSDs.

The company also offers Nvidia cards ranging from the GTX 660 in the base model to the GTX Titan – an additional $1,099.

The Core i3 4130 and GTX 760 in our model handled games like Natural Selection 2 and the latest build of new Steam arrival Overgrowth on the highest settings at a 2560×1440 resolution without dropping a single frame. Suffice it to say, the Zeto’s cheaper configurations are more than capable of handling the games currently available for Linux and titles coming out over the next few years.

The Zeto’s quiet demeanour will inevitably give way to the graphics card’s whirring fans, but everyday web browsing and hacking is still whisper quiet.

With graphics performance getting better all the time and all of the Zeto’s graphics cards near the top of the high-end pack, the Zeto is a future-proof bet for gamers who need a small form factor, but don’t want to compromise on power.

Like all of ZaReason’s hardware, the Zeto has a large number of options that range from the base $999 configuration to over $8,000 and all with a one year warranty upgradable to two or three years.

The company also offers a number of desktop PCs that are perfect for user upgrades. Though they haven’t made it part of the Zeto’s product description, there are only three thumb screws between you and swapping out every component to your heart’s content.

So what makes a Zeto worth buying over your own custom build shoved into an EVGA Hadron Air case?

It’s small. It’s quiet. But it packs a punch.

For gamers who’d sooner get thermal paste all over themselves than onto a processor, the Zeto can get you started on a powerful, yet compact gaming rig without worrying about buying Linux-compatible components or having to install them all yourself.

For gamers who enjoy dabbling with hardware, the Zeto is still a starting place that offers some room for your own upgrades and all whilst showing your support for a Linux hardware vendor. And if you still want to support a Linux-friendly company – and one that chooses hardware that doesn’t require proprietary drivers at that – but need a little more room to work, ZaReason has an array of larger gaming rigs to suit your needs.

Were I in the market for another desktop PC, I wouldn’t hesitate to consider the Zeto for its diminutive footprint and sheer convenience with room for upgrades in the future.

It’s small. It’s quiet. But it packs a punch.

Order the Zeto from ZaReason 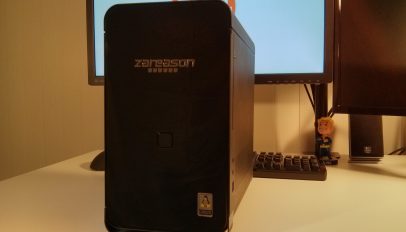 Though it’s a bit cramped inside, the Zeto is great if you need something small but powerful, and ZaReason has options for all budgets. If you need more room for upgrades, go with a bigger model.

Cato Lindberg But the point was really that the way searching currently…
How To Get Nautilus ‘Type Ahead Search’ Back in Ubuntu 18.04 LTS

Shiba I surely hope so. The moment this stops working will…
How To Get Nautilus ‘Type Ahead Search’ Back in Ubuntu 18.04 LTS

Cato Lindberg I think that's doubtful anyway. GTK4 isn't that different for…
How To Get Nautilus ‘Type Ahead Search’ Back in Ubuntu 18.04 LTS

JustPerfection While this post is for 3 years ago but still,…
How To Get Nautilus ‘Type Ahead Search’ Back in Ubuntu 18.04 LTS