Skip to content
For a more recent look at Birdie, its features and how to install it, see this post: http://goo.gl/CmiAO 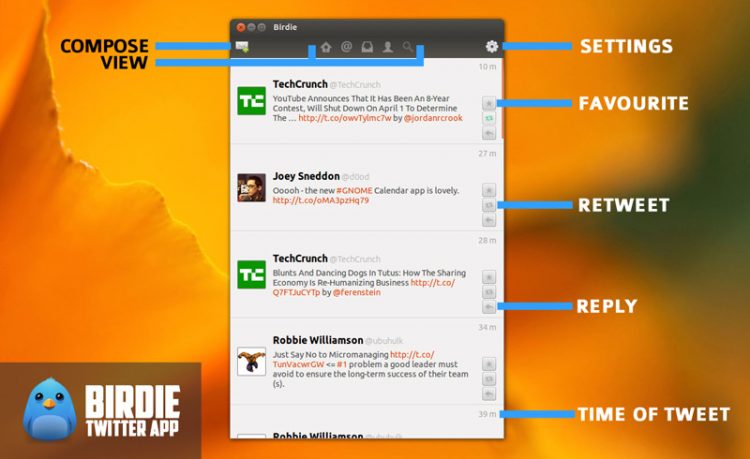 Twitter clients for Linux. Once upon there were a swathe of them. Like Mogwai fed after midnight, newer ones seemed to appear with crazy frequency.

But then Twitter got arrogant. It wanted to control the ‘app’ experience had by its users. It made it harder and harder for third-party developers to engage with its API, and started limiting the number of ‘calls’ – i.e. fetching tweets – third-party apps could make to it.

Apps that slid past the limits would simply stop working. For all its users.

The end result of these ‘rule changes’ has seen many Twitter app developers unable to keep pace. The swathe dried up; abandoned clients dried out; and for Linux Twitter fans the options became fewer and scarcer.

Of course, we weren’t left entirely without options. There are some great Linux apps still around – Polly and Gwibber being two of the most popular. But choices never hurt, right?

As an avid Tweeter I was pretty pleased to learn of a new desktop twitter app in development – Birdie.

While the app is still more a hungry chick than bird in full plume (i.e.: don’t expect bells and whistles) the app does show a lot of promise.

So far Birdie covers all of the basics one would expect of a twitter client. It can tweet; retweet; favourite; send/receive private messages; view profiles, and follow/unfollow accounts. It even integrates nicely into the Ubuntu desktop, supporting notifications, Unity Launcher badges and quicklists, and the Ubuntu Messaging Menu.

Birdie eschews the ‘multi-column’ layout used by other Linux Twitter apps (Gwibber, Polly, Turpial, gFeedline) in favour of a single-column view that’s more akin to the Twitter mobile website/apps. This has both it’s advantages and disadvantages. The main plus being less noise.

If you’re twitching to try the Birdie out then you can. A ‘Stable’ PPA is maintained for Ubuntu 12.04, 12.10 and 13.04. But before you add it remember that jumping on an app during early development does come with a cost: advanced features are lacking, stability is a little wayward, and it may eat your tweets.

For example, Birdie’s “stable PPA” release is missing multiple-account support, , and the ability to preview conversations or media in the app. All elements that help define a ‘good’ Twitter app from a ‘great’ one.

But as I said at the outset, it’s early days. So far, Birdie is worth keeping an eye out for.

Searching has landed in the most recent update to Birdie. 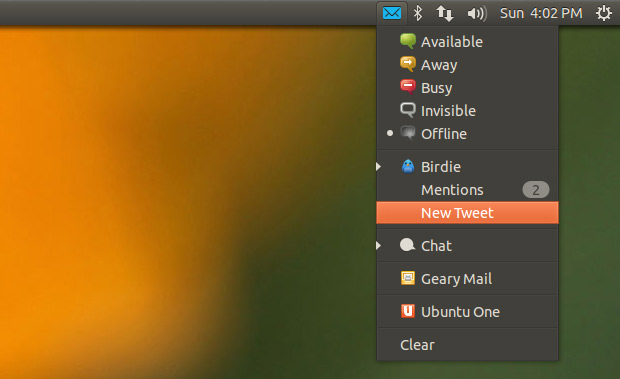 Birdie is development software. It will crash, it will have bugs, and it will eat your tweets. You install it at your own risk.

To install Birdie you’ll first need to add the following PPA to your Software Sources. The quickest way to do this in Ubuntu is to open a Terminal and enter the following code:

Next run the following command to update your sources and install the app:

Once done you can launch Birdie from the Unity Dash. During first run you’ll be asked to add an account. Follow the on-screen prompts to get started. Initial sync takes a little while, so do be patient.