‘RC Mini Racers’ joins a procession of successful games making their way to Linux and the Ubuntu Software Center.

Having spent several weeks at the top spot of the Mac App Store’s ‘Top Free Games’ chart, as well as several months inside the top 10, this title offers Linux gamers another taste of the burgeoning interest in Linux as a gaming platform.

‘RC Mini Racers’ is a game with nothing but frenetic and explosive racing between missile-toting RC cars in mind. 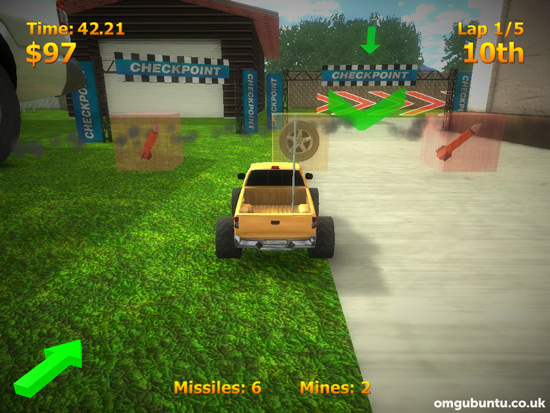 Circuit races are the traditional checkpoint races found in other popular racing titles. You and nine AI competitors fight it out in various 5-lap tracks through backyards and over roofs from checkpoint to checkpoint.

Sprint races take place on similar tracks, but last only a few checkpoints.

Finally, the misnamed “coin racing” does away with any actual racing and lets you roam free in the open, albeit small, world, collecting “coins” for in-app purchases. 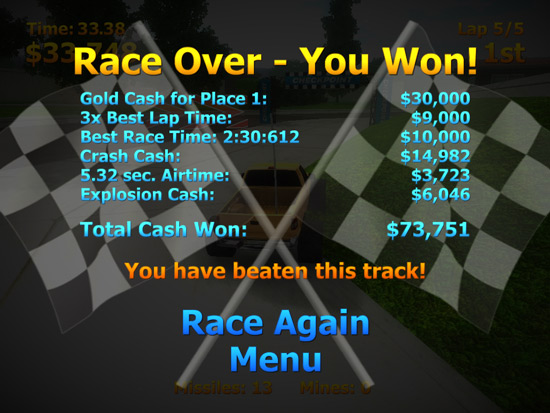 The tracks wind around a single neighbourhood in various configurations with enough variety to keep you entertained every few lazy afternoons. Though tracks feature helpful arrows to guide you toward the next checkpoint, you may find yourself weaving through the wrong backyards and backtracking to find a missed checkpoint.

You can earn money by hitting other players with well-placed mines, firing a barrage of missiles into their undercarriages, and racking up air time on the ramps and curbs scattered across the landscape.

This money can be used directly to unlock more tracks. Each of the four “circuits” in circuit and sprint racing mode have unlockable tracks for Easy, Medium, Hard, and Insane difficulties, with competitors getting more aggressive with each successive level.

Whilst this title carries a freemium model on other platforms, the $4.99 price tag in the Ubuntu Software Center does away with any actual purchases beyond the game itself and lets you trade $250,000 of in-game cash for 5 coins.

Cars can be customised through the “Pimp Shop” with options to change wheel style, antenna colour, and body colour; however, customising the body colour alone can cost as much as 100 coins. A cool sum of 150 coins unlocks one of the cheaper vehicles available in the “Car Store”. 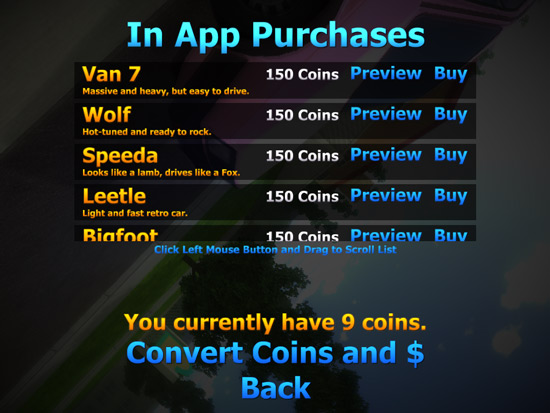 It takes $7.5 million of in-game currency to buy enough coins to afford [a new car]

It takes $7.5 million of in-game currency to buy enough coins to afford one of these additional vehicles. As I could only net around $75,000 at most in a single circuit race, you may find it takes a fair few plays before you can afford that hot pink RC minivan of your dreams!

That said, sporting the default truck with default trim doesn’t hamper the RC mayhem in the least.

Racing feels more or less like a stripped down Mario Kart with the copious shells and power ups replaced by mines, missiles, and a turbo boost.

Each new game reminds you that ‘R’ resets your vehicle – something you’ll be doing often. The vehicles are light and any explosions or collisions can send you spiralling in the air.

A “Steering Setup” mode lets you customise a vehicle if you find it too sensitive or slow to respond whilst ramming other vehicles or dodging mines.

Console gamers can also use a gamepad, but I found it much easier to control the sometimes finicky vehicles with the arrow keys. 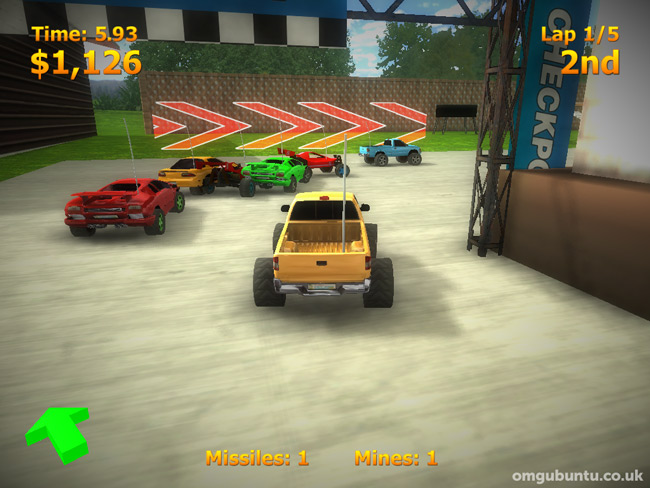 …low resolution textures and rough models are to be expected

The title doesn’t tout itself as the next Gran Turismo and the low resolution textures and rough models are to be expected. But none of this takes away from the pure pleasure of racing RC cars without the interminable need to change batteries.

On a desktop with an Nvidia GTX 260 and the latest Nvidia 310 drivers, the game runs smoothly with all the options at their highest in windowed and in fullscreen with TwinView still enabled.

As always, your own mileage may vary.

The in-game sound effects capture the crunch of plastic against pavement and the high-pitched squeal of an RC car’s motor. Some in-game sounds are oddly reminiscent of other popular titles – grabbing missiles, mines, or a turbo boost sounds akin to Gordon Freeman picking up health packs, whilst finishing a race is eerily reminiscent of doing the same in Mario Kart.

The game’s soundtrack is understandably limited for an indie title, featuring a handful of “hard rock” tracks. If the energetic verve wears thin, music and gameplay sound can be tweaked separately for maximum aural pleasure.

‘RC Mini Racers’ is no Need for Speed, but it’s exactly what it says on the tin: a simple, fast-paced RC racing game to relive – with missile-launcher modifications – those remote-controlled days of yore. 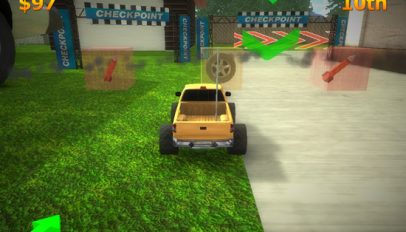 Unlockable vehicles and tracks offer incentives to press on, but low effort-to-payoff keeps it an occasional respite at most. Revolutionary it isn’t. But simple fun it is.