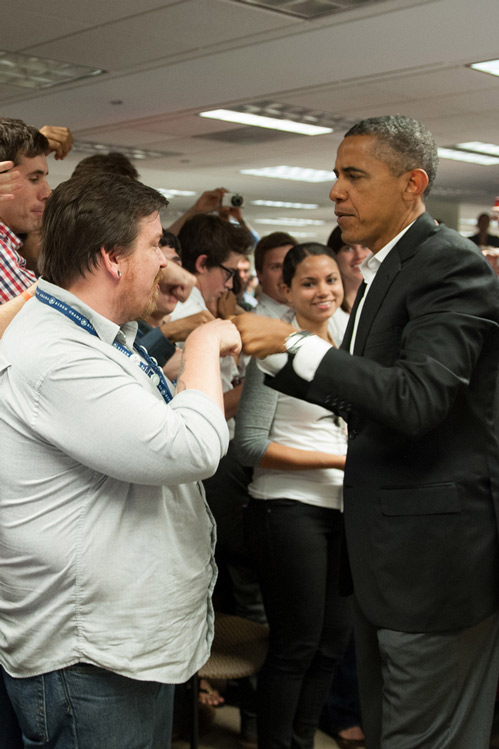 With the Election in the rear-view mirror for Americans we are starting to learn about the tools, assets and people that helped President Barack Obama win re-election.

One of tools that helped give Obama for America an edge was “Ubuntu” due to its cost-savings and the familiarity that members of the team had with it and how well it was supported in the cloud.

I recently had an opportunity to interview Daniel Ryan, who was the Director of Front-End Development for Obama for America, and here’s what he had to say…

Hi Daniel, So you lead front-end development for Obama For America (hereon ‘OFA’), Can you tell me more about this role and what it entailed?

Sure. I led a team of two dozen developers, QA techs and support staff that produced client-side code for the campaign. Additionally I liaised with our server-side and devops teams to coordinate work between everyone

So there has obviously been quite a bit of buzz surrounding the news that OFA used Ubuntu can you tell me why you guys chose Ubuntu and why it was a valuable piece of the puzzle?

‘Ubuntu was the lowest cost route’

Rather than me telling you what I think, I asked Scott VanDenPlas, our lead DevOps engineer, why we chose Ubuntu:

Sure, it was the lowest cost route. Don’t care what we run in ops necessarily, but engineers have all used Ubuntu on desktop at least. Debian underpinnings are awesome, and we did deploy our apps via apt…

In the end, it keeps a consistent environment for developers and makes it familiar. We always tried to get out of the way. Ubuntu also tends to be updated very aggressively, and is well integrated with ec2. The cloud-init stuff Moser worked on was very helpful early on as well.

‘I’ve been considering installing Ubuntu as my personal OS’

I see you’re quite the Pythonista! What kind of hardware do you develop on and what OS? If not Ubuntu why?

I write my code on a MacBook Air running Mountain Lion and deploy to EC2 running Ubuntu 12.04 server.

I’ve been considering installing Ubuntu as my personal OS for a while, but I’ve never wanted to spend the time learning new tools to make the transition.

What kinds of hobbies do you have outside of technology?

Currently my biggest hobby is sleeping and sitting on a beach. It’s been quite a year and a half. My academic background is in history, so I love reading good history. I got on a big John Adams kick while at the campaign.

‘we’re not in a zero-sum game; everyone can share effort and reap reward.’

It’s absolutely fascinating to me. Thinking of computing on a building or multi-site level is such a mind-bender. It’s great to see so many big players working together to build out standards like this.

I really love the mindset behind open-source that says we’re not in a zero-sum game; everyone can share effort and reap reward.

Where do you go from here now that the re-election was a success?

I’m considering a bunch of offers, thinking about potential start-ups, and mostly enjoying time to catch up with my family and friends. I won’t be making any big decisions before 2013.

Do you have any advice for aspiring developers interested in getting involved in technology within the political realm?

I was chosen by the campaign in large part because of my work in responsive design and big data visualizations.

From a skills standpoint, the work that makes you stand out in any development crowd will apply to the political arena as well.

We would like to thank Daniel Ryan and Scott VenDenPlas for taking time out of their busy schedule to do this interview with us.

You can find Daniel Ryan’s code on GitHub https://github.com/dryan
Daniel Ryan’s Personal Website is at http://dryan.com/
Daniel Ryan is also on Twitter https://twitter.com/dryan