Follow the story of an atypical robot hero set out to rescue his robot-girlfriend, and in turn save the city and defeat the bad guys.

Machinarium, is another artfully designed puzzler from Amanita Design. Like most role-playing games, you control the titular character, in this case a robot, as you guide him through the eponymous city, collecting items and solving environmental puzzles.

Whilst quiet in its narrative, Machinarium is rife with plot; an unexplained bomb plot against the city, combined with an opportunistic kidnapping. Yet the game focuses on our unassuming robot friend and his simple desire to return to his absent female companion, after being accidentally dumped in the scrap yard. 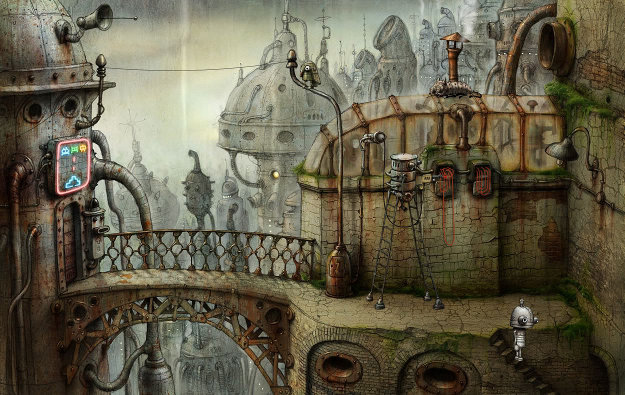 Machinarium is notable in that it contains no written or spoken dialogue, at least not understandably so. Instead, you are guided through the game by a series of animated thought bubbles from the player’s character, and from the various characters you interact. 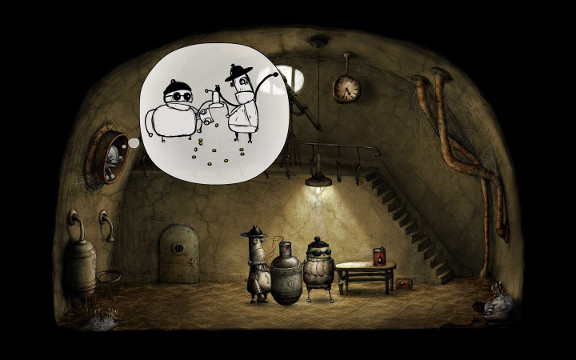 At no point is Machinarium obviously straightforward, solving the puzzles does require a degree of logic. Within the game, your interaction is limited to objects within the robot’s reach, fortunately our hero is drawn to items of interest so you’re not left dragging the cursor about trying find some sign of interactivity.

Beyond standing and picking up things, our robot hero has some abilities (albeit they are rather mundane): he can stretch and squish his torso and extend his arms to reach and interact with things that may be of some use to him, some of which he’ll eat for use later. 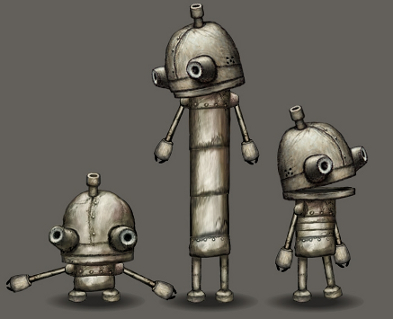 If you get stuck, the game does provide some help. Each level has a use-once hint available, which becomes less useful the further you progress.

Alternatively, beating a side-scrolling mini-game unlocks a walkthrough for the current puzzle.

Like the rest of the game, the walkthrough is not written or spoken, but is a series of sketches describing the current puzzle and how to solve it.

The folks over at Amanita Design seem to have a knack for beautiful games, and Machinarium is no exception. With the entire game being hand-drawn, it gives the dystopic Machinarium a certain whimsy, and the industrial trip-hop soundtrack is quite befitting as well.

If you’re into logic-puzzle games, Machinarium is perfect -thankfully, it has built in hints for those inevitable moments of frustration. However, like most puzzle games, it’s replayability is lost when the answers are known.

Machinarium uses Adobe Flash as it’s engine; suffice to say, there are performance issues on Linux.  Having said that, my chief problem was cursor drift within the game, which I found was solved when disabling the full-screen mode, then the game ran relatively smoothly.

Machinarium is available for purchase in the Ubuntu Software Centre for $10.00, or you may have gotten it as part of the Humble Bundle for Android 4 lineup.

Machinarium is cross-platform; the PC version supports Linux, Mac OS, or Windows and is found on Steam, or if you’re into mobile: Android and iOS (limited to the iPad 2 it seems). 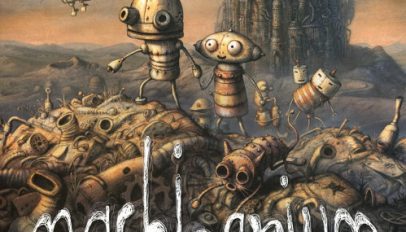 A beautiful and thought-provoking, puzzle game.