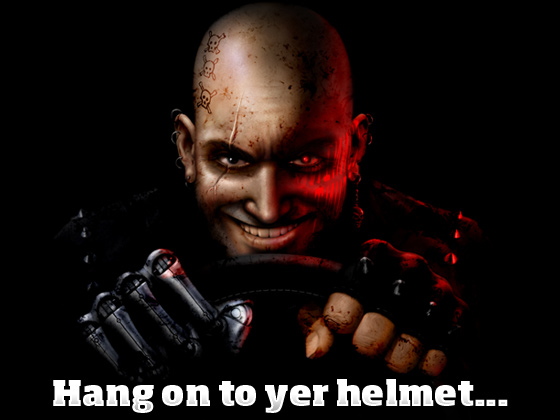 Here’s where you folks get to call me uncool: I hadn’t, until today, ever heard of the notoriously violent racing game (and then some) Carmageddon.

The team behind the iconic 90s game are raising money on Kickstarter to redevelop and reboot the game for today’s generation of gamers.

Their goal is a whopping $400,000, with a deadline of June 16th. They are currently on $60k short of reaching it, but the signs are looking good.

Carmageddon: Reincarnation will be, initially, distribution via Steam on Windows only, though a DRM-free non-Steam version will be made available at a later date.

PS3 and XBox 360 ports are on the developers ‘wish list’ should time and money allow.

But on to why I’m writing about the project on a Linux-orientated website.

The Carmageddon developers have announced that Linux (and Mac) support could happen – but only if they hit their ‘stretch goal’ of $600,000.

Does the $200k bump seem high to you? The developers explain: –

‘We’ve been doing the work here to assess how much it would cost us to port our technology and then the games to these OS’s’s. We’ve rounded down the resulting figure a bit, [but] we are willing to commit to porting the game to both Mac and Linux, if we reach $600,000.

‘And you’ll just have to take our word for it that it’s a bargain at the price. All our tech, on your Mac thing or Linux device, running Carmageddon: Reincarnation! But we believe the market IS there, because you’ve been telling us – and many other developers here on Kickstarter – that it IS!’

Nice that the devs are so positive about the Linux platform, and should they reach their goal to port their ‘technology’ over to it then future games developed for Linux would be a fraction of the price.

The bad news is that, like the DRM free version for Windows, a Linux port wouldn’t see the shiny side of the sun until the end of 2013.

And there’s also the question of what happens to the post $400,000 money pledged if they fail to reach their stretch goal. Users pledging for a Linux version would still be liable to pay, but the devs wouldn’t have reached their goal to create a Linux version…

But good things come to those who wait, right?

All of the financial and pledge details can be found over on the Kickstarter page. There are some lovely physical rewards on offer for relatively small amounts.

So if Carmageddon left a scar on your younger years nows the time for payback.

Thanks to everyone who sent in a tip about this – appreciated!