The latest Indie Royale Bundle has been running for a few days and whilst 4/5’s of the game on offer aren’t available for Linux one is – and it’s one that’s worth mentioning. 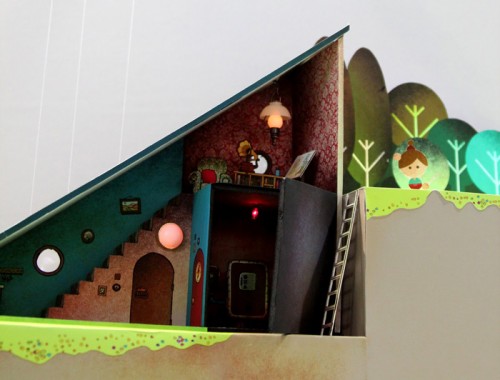 This unique approach to visuals means that Lume looks and feels like nothing else. It’s adorably adorable. It’s easy to forget that you’re playing a ‘computer game’ as the cutesy paper graphics look and almost-feel so very real.

The twee plot more than matches the visual style. The lights have mysteriously gone out at your granddads house – and he’s disappeared too. You have to work your way around 5 rooms solving often a variety of puzzles to unearth the truth and put things right.

Regardless of your disposition towards the game it does sit on the knife-edge of lovability (the transitions scenes can be sickly sweet), but the independent ethos, unique look and sheer attention to detail means that even if the saccharine gameplay doesn’t draw you in then the ‘art’ of the set probably will.

But that’s not to say the game isn’t fun. It is. The point and click ‘mystery’ mechanic employed by the game is charming, and the puzzles are suitably challenging for the casual gamer.

Oh and did I mention that it looks good?

The only major drawback to Lume is that it’s just too darn short; like the lights in the plot everything goes dark rather abruptly.

Lume is the only title in the Indie Royale Bundle that is available for Linux.

The current minimum price needed to buy the gamut of games is currently sits at a smidgen under $3 (bear in mind that Lume typically costs $4.99 on its own).

Ardent gamers on Linux may like to know that Lume can be redeemed on Desura.