Do you think gaming on Linux has improved over the past few years?

Although variety and graphics might be a little off that available for OS X and Windows there’s no denying that with every passing month Linux as a gaming platform grows ever more viable.

0 A.D is a completely open-source RTS available for Linux, Mac and Windows. The game, which is in heavy development, currently sits at the Alpha 8 junction. Undeterred by the development nature I took the title for a spin… 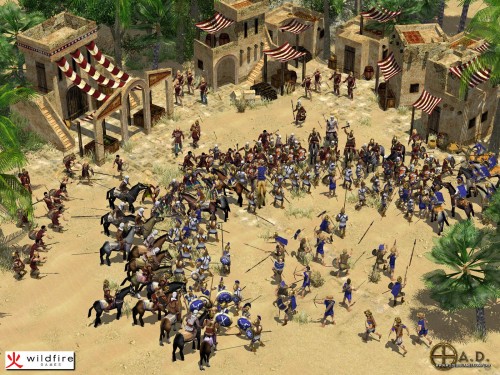 The gameplay of 0 A.D. is pretty much like the game-play of any RTS out there – you’ve got the mini-map in the bottom left, the resources are shown on a bar on the bottom of the screen, double clicking on a unit will select all units of this type in proximity, rally points are set by selecting the building and than right-clicking somewhere on the map where you want the rally point to be, tasking a unit to perform an action is executed by selecting a unit then right clicking on the enemy you want your unit to attack.

All straightforward RTS gaming tropes that are great to have.

The ‘building’ part of 0 A.D. really impressed me.

In 0 A.D. your military units can not only fight enemy units, but can also gather resources and build (all kinds of) buildings. You civilians are only able to build some kind of buildings (non-military) and gather resources.

The buildings in 0 A.D. also act differently compared to those in Age of Mythology – farms are bigger and one can task multiple villagers to gather food from one farm, also they don’t exist for a limitless amount of time. Towers needs units to be garrisoned inside them so they can have attack points, etc.

There are 6 civilizations in 0 A.D.

They are plenty of maps from which one can choose, however quite a lot of them are tied to scenarios. List of maps include:

Graphics and settings are the two aspects of 0.A.D. that are far from impressive.

The first thing I noticed was the heavy flickering and lagging of the graphics under my Intel video, so I was forced to switch to another PC of mine which much better video in order to test the game and even there the lagging appeared after approximately 30 mins of playing. Now that kinda come as a shock to me, because the level of graphics was nothing that my video was incapable of handling.

Settings – they are none. There is Options button in Tools and options in the main menu, but it’s inactive to click on. I didn’t found a way to configure any sort of settings via editing config files or such. Now, this comes as no surprise, because the game is still in heavy stage of development and I’m certain that settings will come at some point down the line.

If you are ready to “Get on the Carousel” you can download 0.A.D. by clicking on the blue button below and then choosing your OS:

You can watch a video of 0.A.D. latest version in action from below:

Personally I found 0.A.D. to be the most exciting game available for Linux. It still has a long way to go before being completed but I am confident that the game will, like some of ancient civilisations within it, grow into a something special; a milestone sure to be noted in the history of Linux gaming.