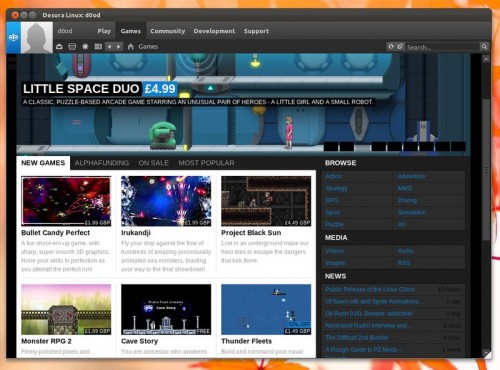 Recently, the fine folk here at OMG! Ubuntu! shared the news that Desura had been released for Linux.

The gamer in me squeed with joy at the news. The adult in me bemoaned the lack of funds for such games. The happy medium said, “check out the free ones!”

Love it or hate it, Desura is a milestone for Ubuntu. It’s like Steam-lite. We’re making those tentative steps towards the elusive mainstream.

One day, hipsters will look back on these days with nostalgia as they talk down to people at coffee shops. Brings a tear to my eye.

But, What About the Games Already?

Being a responsible adult and all that I have dutifully wasted all my cash on XBox 360 titles. Having beat those– and to commemorate what I clearly see as a momentous occasion– I jumped head first into Desura to pick apart its free offerings to fill that gaming vacuum.

Now, I’ve never used Desura on Windows, so I have no idea what the platform offers there. All I know is that Linux’s offerings are fairly meager. Don’t mistake me, there are quite a few gems available through Desura. (Braid– which I’ve bought twice over the years, I don’t need to buy it again– I cannot recommend enough; Blocks that Matter is interesting, but I couldn’t get the demo working *sadface*; and Project Black Sun also caught my eye from the for-pay items)

With only sixty-six total games available, though, the well will run dry fast.

To break down my experience, the free games on Desura fell into four categories for me: Shooter, MMO, Arcade and Massive Nostalgia Attack (TM).

Love them or hate them, shooters made up about 80% of the free offerings in Desura. Most of them are focused more on arena shooting over anything else, so it’s not fair for me to really say much about them since your mileage will vary depending on who you play with, if those games are your thing, etc.

If that is your thing, why are you even here right now? Get in there! (Alternately, some of those items are available in the Ubuntu repositories such as Warsow)

MMO’s… If you love them, you don’t need my words. Same goes for you arcade folks. Not my particular favorite, so I’ll leave it to someone better qualified to pass judgement in the comments. ;)

You’re Building to Something, Aren’t You?

Oh heading titles, you know me so well! Yes, I certainly am building to something: Cave Story. A game that so solidly wails on my nostalgia bone that I almost cried. Like a man.

The gameplay is a solid mix between a lot my retro hits: Metroid, Castlevania, Phoenix, and a sprinkling of Zelda. The story isn’t some barebones excuse. (I’ve not finished it, you guys better not spoil it!) The art is massively old school pixels. I came expecting light fare, not to fall in love.

After a bit of research I wasn’t surprised to find the title is also available on many other platforms. Some of them for-pay. Support the artists!

Whew, You Have Me All Flushed…

To scale it back for a moment, we must acknowledge some flaws in all of this.

First off, since we were just talking about it, Cave Story doesn’t help itself. You better know what keys to use ahead of time. (Not cool, but that is how it was in olden days as well… Modern gaming, how you’ve spoilt me! *

Finally, this article isn’t comprehensive. I’m sure you all understand this, but it needs acknowledging: you wouldn’t pass judgment on Steam based solely on its free offerings. So I am not passing judgement on Desura. They are doing the best with a bad situation and need a strong clap on the back for it. Is what they’re doing working? Is it the right thing to do? Does it have any other gems?!

I simply don’t know. Time will tell for some of it.

Wow, What a Let Down

I found unexpected fun in preparing this article, and, if nothing else, I hope one of you will find fun as well. That’s why I’m writing this for you all. Here’s hoping I might see some converts to these admirable offerings!