This week’s Download of the Week is short and sweet: Byobu

For those of you who haven’t used GNU screen, it provides a window manager for shell sessions; think of it as a Compiz for your Terminal application.

Byobu is a script that launches GNU screen with a custom configuration which among other things, provides handy system information in the bottom two lines of the screen session itself such as how many system updates are available, memory usage, and date/time.

Not only do you receive the full power that is screen, such as being able to attach/detach/reattach to shell sessions and share sessions, but also handy keybindings that allow you to open and manage new, tabbed terminal sessions. 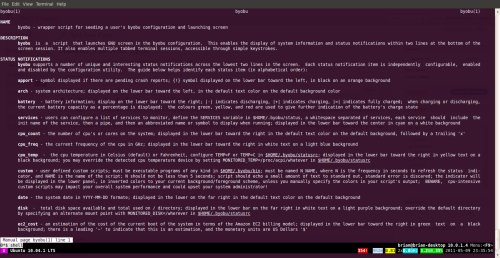 In closing, I’ll leave you with a bit of Byobu trivia. Instead of simply looking up what Byobu meant, I first kept trying to figure it out on my own. At first I thought it was “Bring Your Own Beer, User”; then I could have sworn it was “Build Your Own Better Ubuntu.”

Alas, it’s not an acronym at all. Directly from the project page, “?Byobu is a Japanese term for decorative, multi-panel screens that serve as folding room dividers.”