Angry Birds may or may not be coming to Linux natively but in the mean time fans of propellant animal games (Yeah, I just coined that. Sue me) can get their fix with unabashed flash clone ‘Angry Animals’.

Created by ‘Flash Ninja Clan’ (link no longer active), the free game follows the same layout, style and gameplay of the game it is aping. The main difference being the usurping of birds with a variety of other animals. 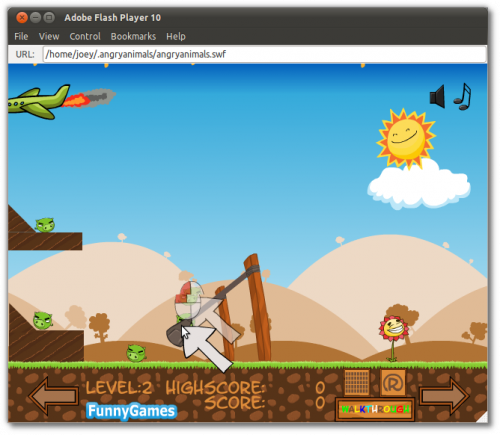 The game is playable in the browser or, using the following script sent to us by Zarko Zivanov, directly from the Ubuntu desktop regardless of whether you’re online or offline.

Zarko says: “Because I found the game quite enjoyable, I downloaded it to my own computer and made a desktop launcher for it. Then [i] decided to make a bash script to automatize the job.”

That script can be found at the link below.

“The script will download the game, icon and flash player and make a desktop launcher for the game, so it can be played locally, without web browser or internet connection. After downloading, one should open [a] terminal where [the] downloaded file is and type:

The script needs wget, tar and imagemagick packages to be installed. ”

Alternatively just right click the .sh file, head to the ‘Permissions’ tab and grant it permission to ‘execute’. Then double-click it and choose ‘open in terminal’.

To uninstall the game just remove desktop launcher and the ‘.angryanimals’ folder in your Home directory.