The first release of elementary OS – a new Ubuntu-based operating from the elementary-project – has been made available for pre-order ahead of its March release date.

Code-named Jupiter, the OS is built around many of the elementary projects own creations, including the iconic theme and icon set and applications such as contacts book Dexter and e-mail application Postler.

Pre-orders can be placed on the elementary project website and cost $10 US. This sum will be used to cover the printing and shipping costs of the CD’s.

Like the Ubuntu model it is based on, downloads of the OS will be  available for users to download for free.

Others applications confirmed to be shipping in the first release include Docky, Nautilus-elementary, Midori, Empathy, Abiword, Gnumeric, Ease, Totem, alongside traditional desktop accessories such as a calculator, dictionary, etc

Elementary’s new file-browser project ‘Marlin’ will not feature in this release, nor will the music player ‘Rhythm-e’. 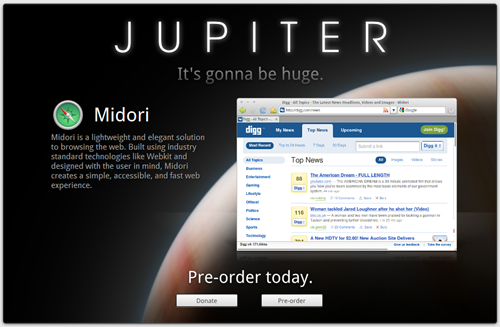 Named after the roman God of the Sky, Jupiter sets in motion the naming scheme for elementary os which is to be named after Gods of different cultures.

“Jupiter is the culmination of many many hours and believe or not *years* of work. It’s the beginning of something new and I think in the coming months and years we’re going to not only make a mark on FOSS, but change it forever.” he told me in an exclusive chat before pre-orders went live.

“I would be happy if just the 100 people bought CD’s and we got to ship them out, it’s not really about making money or anything (thus the free download), but of course one can always dream of a day where we get enough monetary support to employ people to work on elementary full time.”

Pre-orders can be placed at elementary-project.com.