I’m sure this legend doesn’t need too much introduction – Federico, along with Miguel de Icaza, worked together in the late 90s to start the GNOME project – the desktop environment that Ubuntu and many other distros use. Since then, Federico has done many things, including maintaining GIMP, working for Red Hat, Ximian, and now he works for Novell.

We sat down with Frederico for an exclusive chat.

Federico! Tell us how you met Miguel at university.

On my first day of class, Miguel and his friends (who were already at the university) were playing a prank on the classroom next door. You know, impersonating the teacher or his assistants, and lecturing about “this course is really hard; here is some bibliography in German, read chapters such and such by next week”.

I don’t remember the details, but I think what happened is that as the class ended, I heard someone outside the door disparaging loudly against C++. At that time I was learning C++, and it being so hard, I thought it had to be really good. So I came into the argument and that’s where I met Miguel and other hackers at the university.

I remember one day very clearly; Miguel was watching me write code, and he asked, “why do you put those constants in an enum? Why not as #define macros?” I told him, “because then gdb can show me their names, instead of just showing the numeric values”. I think that’s the moment when we both realized we were good programmers.

How did GNOME start?

The story is well-known; you can read it here.

GNOME has come a long way since you two were at college. What are you happiest about and when would you like to change?

What would I like to change? I would like the good hackers to be able to spend less time maintaining the stuff they already wrote – we need to make it easier to pass the baton to other maintainers. I would like GNOME to succeed in going past the traditional “desktop metaphor” – fortunately that is already work in progress.

We need to make it easier to pass the baton to other maintainers.

Can you tell us what you guys are working on now?

I’m working on MeeGo-related stuff, rather closer to GNOME than to MeeGo. Making Evolution work well on netbooks and stuff like that. I’m slowly moving away from maintaining GNOME’s RANDR stack to support multiple monitors and projectors; it seems to work well enough these days that it doesn’t need constant attention.

I’m trying to make some time to work on the “document-centric GNOME” project.

Having worked extensively at Ximian, what do see Canonical needing to do to continue being successful?

I don’t know everything that they do, but “become profitable” sounds like a good goal :) Every young company needs to find a way to sustain itself and to be able to add new work.

Do u miss the Ximian days?

Yes and no. I miss knowing everyone in the company personally. I miss the constant energy of there always being something exciting to do. I don’t miss the ridiculous working hours, but maybe that’s just me getting old.

What’s your take on MeeGo? There seems to be a split coming up ahead in the road between the traditional GNOME experience and something more tailored to the netbook/phone market. Do you feel the GNOME community is ready for it?

MeeGo is not really *that* related to GNOME. They changed toolkits, which I think is ridiculous for app developers, but makes sense for Nokia. If people really start writing apps for MeeGo and they become popular, you will see MeeGo diverge from GNOME quickly.

MeeGo *is* using a lot of technology that came out of GNOME or that is normally associated with GNOME, and that makes me very happy. It means that GNOME is a good place where general-purpose infrastructure gets made.

I don’t know if MeeGo will be successful or not. I hope that technology or UI ideas come out of it that we can apply in GNOME at large, and that it doesn’t become an exercise in reinventing things because it’s easier to write code than to modify existing code (e.g. Connman). I do hope GNOME becomes attractive enough that you wouldn’t want to “replace” it for netbooks, but that doesn’t mean I’m against MeeGo.

Following Nokia’s acquisition of Trolltech and the subsequent “freeing” of Qt, how do the GNOME guys feel about KDE/Qt as a development stack against GNOME’s platform?

Qt is an excellent toolkit. I think it tries to do too much, but I see the beauty in having everything integrated within the same mindset.

KDE (with Qt included) is basically equivalent to GNOME. I’m happy that we copy each other’s good ideas and try to avoid the bad ones. If you read Jane Jacobs, you’ll understand why this is not gratuitous duplication, but is actually valuable. 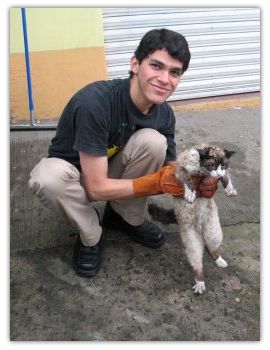 Can you imagine a GNOME built on Qt, or is this Meego?

Wrong assumptions. You could perfectly well build GNOME on Qt. MeeGo is an ambiguous product and a specification, and is explicitly not a traditional desktop.

Wasn’t there a GNOME Mobile thing going on? Is it to late for GNOME to enter the mobile market now?

Yes, there was. There are many political and personal reasons why it was stillborn. I know only very few details, so I don’t want to make up stuff about why it was like that.

I’m not sure what it would mean for GNOME to “enter the mobile market”… does that mean a GNOME for phones? You don’t want a WIMP desktop on your phone. Does it mean packing up the GNOME infrastructure and building a good interface for phones with it? Does it mean doing a beautiful job of providing a development platform for phones?

In any case, it would mean being credible enough that a good number of people and companies would want to develop and use “the phone version of GNOME”. GNOME-as-a-desktop got credible by being good, but that only happened after monumental amounts of work went into it. Evidently that work was missing in GNOME Mobile.

What distros do you use?

What do you think about GNOME 3?

A lot of people are commenting on the similar approaches to UI between Canonical’s Unity and GNOME’s Shell. Do you see an overlap or duplication of design here?

There is probably a duplication of design, but that’s not harmful. It just means that people are realizing that certain problems exist with our traditional desktop-ish UIs, and they are trying to fix them.

Unity seems to be growing more organically, which is good. Gnome-shell still comes from a Grand Design that may turn out to have problems. Both will turn out to have good parts and bad parts; I hope they can realize what each other has to teach.

I like to think of Ubuntu vs. GNOME as Japan vs. the World.

I like to think of Ubuntu vs. GNOME as Japan vs. the World. Ubuntu is its own little universe, a very exciting one with a huge internal economy of development, but things tend to stay within Ubuntu. The rest of the world is rightly awed and jealous and annoyed that it seems so closed. Good things “escape” Ubuntu every now and then, but from the outside there doesn’t seem to be much effort to do that.

It is! I’m happy that I just had to scream for an hour at one GUADEC, and then awesome hackers just materialized to implement it way better than I ever could.

Are you and your wife planning another baby so it can play with Miguel’s baby?

We are planning another baby, but not yet. It will be hard for it to play with Miguel’s, since he lives so far away in the North Pole while I’m a tropical species.

Tell me something about Miguel he wouldn’t tell me about himself?

He used to have long, curly hair, tied in a ponytail, which made us call him papaya head.

Hot and sweaty, not in a good way.

Hot but I wish it were more visible.

Huge thanks to Federico for taking the time to answer our questions. We hope you enjoyed reading the interview, and of course, we couldn’t possibly interview one founder of GNOME without interviewing the other! Keep an eye out.