We’re all acutely aware that spending long periods of time in front of blazingly bright computer screens isn’t entirely fantastic news for our eyes – or our sleep patterns. Nevertheless we stare away anyway unaware that there are solutions.

We’ve mentioned RedShift a few times on OMG! – an app that automatically adjusts your monitors colour temperature to that of your surroundings. By reducing the glare of a bright screen at night it’s you’ll put less strain on your eyes and, potentially, induce normal sleep patterns.

There is also another similarly premised application available by the name of  F.Lux (or more commonly known for Linux as XFlux).

“During the day, computer screens look good. They’re designed to look like the sun. But, at 9PM, 10PM, or 3AM, you probably shouldn’t be looking at the sun.”

F.lux deals with this by “…[making] the color of your computer’s display adapt to the time of day, warm at night and like sunlight during the day”

The biggest catch to XFlux until now has been the fact that it was command line only. No GUI, no pretty tray icon, just out-and-out command line schmuck.

Thankfully, with the blessing of XFlux’s creator Michael Herf, a new indicator applet for setting, controlling and, indeed, configuring XFlux has been developed by OMG! iRC! regular, and all round awesome dude, Kilian Valkhof. 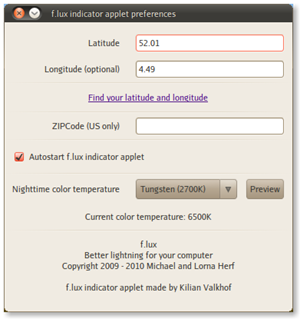 Put simply this GUI means you don’t need to get sticky with the command line.

Once installed (see below for installation instructions) you can launch it via the Applications > Accessories menu. On first launch you will be prompted to enter you your latitude and langitude (complete with easy link to find this) or your zipcode if you’re an American.

Check the “autostart” option if you would like f.lux to autostart and run in the background.

Drooling is only one part of getting a new application. Installing is the other bit.

Kilian has souped up a PPA for Lucid & Maverick users making installation a cinch. Open up a terminal and enter the following two commands carefully.

If you installed the application earlier today then you may have noticed it didn’t work. Kilian has some words on why: –

Okay, listen up everyone. Sorry for messing up. There were some bugs relating to the first time the applications was started. They have all been fixed, and there will be an update on the PPA later today (version 1.1.4)

However, before it will work, you will have to manually remove “fluxgui.pid” from the /tmp directory (for example, by typing “rm /tmp/fluxgui.pid” into a terminal. After that, f.lux for ubuntu will work as it should :)

Go leave some love over @ kilianvalkhof.com/2010/linux/flux-for-ubuntu/ if you dig this tool & for more information on F.Lux visit stereopsis.com/flux/