A few days ago we reported on the release of two new multimedia applications created by the awesome company that brought us the Shotwell photo manager. Yorba’s projects certainly seem to evoke the feeling that a tightly integrated set of creative applications – an iLife for Linux if you will – is within reach.

It wouldn’t be a lie to say that Yorba’s applications are designed with the GNOME desktop in mind (although they can in other desktop environments) and almost all are written in Vala.

Fillmore provides basic multi-track recording/editing functionality via the use of the GStreamer and Gnonlin media libraries.

For a lightweight and purpose-driven application the first release is acceptable. It doesn’t have the fine-tuned controls of fellow audio-editor ‘Jokosher’ but no-one was expecting it so. So far the features consist of the following: –

Fillmore mixes down and exports to the free Ogg Vorbis format.

There are quite a few vaunted features planned for Fillmore’s future to get excited for, including: –

Lombard is the video editing tool of the pair and, looks wise, shares a very similar layout and UI to Fillmore. can handle any video format supported by GStreamer. 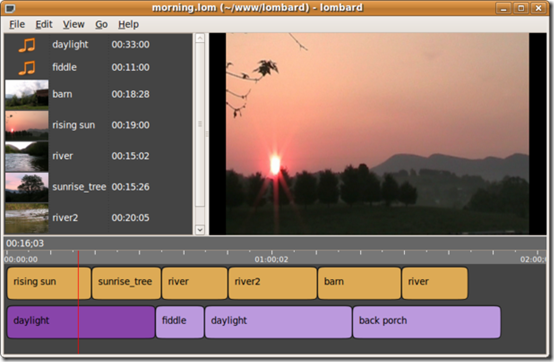 Lombard handles basic media editing capabilities such as trimming, pasting, splitting and cutting of clips with ease and such feels very reminiscent of PiTiVi in its early days. This similarity has grounding given both PiTiVi and Lombard make heavy (nay exclusive) use of the GStreamer framework. However, unlike PiTiVi, Lombard exports solely to Ogg Theroa and Ogg Theroa only at present but it able to handle pretty much any video format thrown at it – providing it’ is supported by GStreamer.

Arrange audio and video clips on a timeline is very easy but I don’t like the fact that you can only drag n’ drop to add clips in the first place; in situations where Lombard is running fullscreen it’d be much preferable to use a File > Selection approach rather than minimize, open file manager, drag clips, re-maximize.

Part of Lombard and Fillmore’s USP is the level of integration that exists between them. As both applications share much of the same code projects saved in either app can be opened in the other; meaning you can edit a video in Lombard and then open it up in Fillmore to do attentive audio adjustments.

This feature is, put simply, an incredibly boon and an incredibly annoyance all at the same time. Whilst the adage ‘jack of all trades and master of none’ clearly isn’t applicable here, the departmentalising of feature sets into separate applications will irk the less patient users. Imagine having to save > open in Lombard > save open in Fillmore, every time you want to do some video editing…

That noted, I should disclaim that this work flow suits myself; I usually always edit video first then deal with the audio, no matter what application I’m using. The integration between the two applications shouldn’t be discounted on purely ‘inconvenient’ grounds either – the tight integration between such different applications (you can use one without the other, ofc) is wonderful to experience on Linux which has, at times, felt like a loose assembly of vaguely related parts.

These are, of course, early days for both applications. Neither had seen a proper release prior to this so harsh criticisms’ or extrapolations on lack of this or that at this ‘progress pit-stop’ would fast be moot but one thing is true: Linux users really are beginning to become spoilt for real choice.

Home » News » The Linux iLife? Lombard and Fillmore certainly feel like it…