Opera 10.5 pre-alpha was released as an early XMAS present for Windows and Mac users early last week but Linux users were seemingly left out in the cold. However the reasons for the delay in a Linux build are more than exciting enough!

Benchmarks of the Windows and OS X pre=release already show that the browser not only matches Chrome’s V8 engine for speed but in some tests beats it!

As we reported on earlier last weeek, Opera 10.5 will come with “Desktop Opera Widget” support – allowing you to run Opera widgets on your desktop without the need for the browser to be running.

The Linux version of 10.5 wasn’t released alongside the other OSes. Annoying for some, but the Linux build is currently not quite ready enough according to developers.

One reason for the delay is most certainly down to the fact Opera 10.50 will no longer use the Qt framework for its interface.

No, that wasn’t a typo – Opera is ditching Qt and will instead rely on X11 drawing for the interface. Native window styling for both GNOME and KDE users will also be available in 10.5.

Stripping the Qt component out of the next version will make Opera “…faster, smaller and easier to install.” Huib Kleinhout continues “Naturally Opera will still integrate well with your desktop environment by supporting KDE/GTK skinning and show open/save dialogs that match your desktop.”

The reasoning behind the dropping of Qt may seem odd until you learn that, according to Opera developer Arjan van Leeuwen, “…integration with the main desktop environments and toolkits on *nix (Gnome/GTK and KDE/Qt) is easier for us without Qt than with.”

Opera developer Ruari Ødegaard posted some screenshots of the for-now internal build of the Linux Opera 10.5. The title-bar in the screenshot below may not be present in the final version, as per the Windows and Mac builds which omit it, but nothing as yet has been decided. 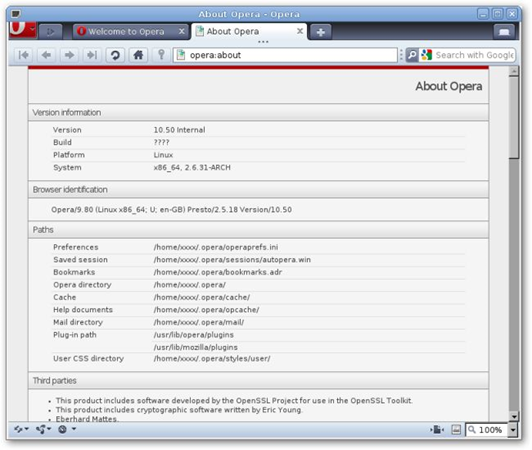 When will a Linux version be available?

There will likely be no Linux pre-alpha, however developer Shwetank Dixit responded to a query on his blog that the first Linux version will be the proper Alpha.