The Ubuntu 20.10 codename has been revealed in all of its glory — and if you thought that ‘Disco Dingo‘ was a far out name, wait until you meet the ‘Groovy Gorilla‘.

Yes, “Groovy Gorilla” is the development codename chosen for the next stable Ubuntu release, which is currently earmarked for general availability on October 26, 2020.

Ubuntu release names get picked in alphabetical order. With ‘G’ coming after ‘F’ (the ‘Focal Fossa’), which followed on from ‘E’ (the ‘Eoan Ermine’), the Groovy Gorilla keeps the gleeful tradition going.

Now, I probably don’t need to tell you what a gorilla is — and if you don’t know, I don’t believe you 😄— and the term groovy is… Well, it’s a far less obscure adjective than terms like ‘Eoan’, ‘Xenial’, etc — not to mention far more pronounceable too!

The dictionary definition of “Groovy“ describes it as an informal adjective meaning ‘fashionable and exciting’, e.g., “That’s a groovy new wallpaper!” or generally ‘excellent, e.g., “A groovy release filled with greatness”.

This is the second Ubuntu release to be named after an ape, with Ubuntu 7.10 ‘Gutsy Gibbon’ — my first taste of Ubuntu — also part of this mascot troop (trivia: ‘troop’ is the collective name for a group of apes).

Ubuntu 20.10 is the Groovy Gorilla

I’ve barely had time to finish foraging around the new features in the Focal Fossa, but, as always, development never stops!

Naturally I will start sharing everything you need to know about Ubuntu 20.10 — I keep reflex typing it as 12.10, so apologies in advance — once development gets underway .

In the mean time let me know what you think of the codename (and what you would’ve chosen if you’d been in charge) down in the comments section below! 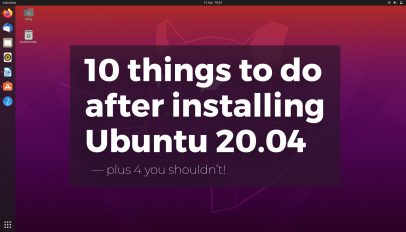 10 Things To Do After Installing Ubuntu 20.04 LTS
Read Next