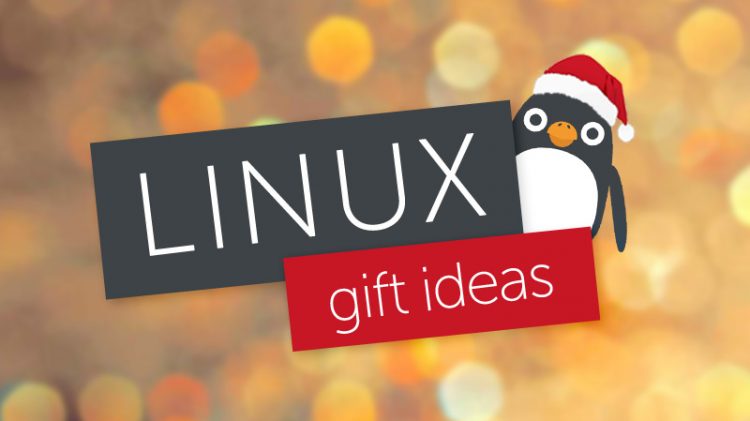 Crikey, folks: it’s December, and that means Christmas is shortly to be thrust upon us, whether we’re ready or not!

It can be tricky to come up with gift ideas for Linux users in your life. And since you’ve probably got more than enough turkey on your plate this holiday season — ho, ho, ho — we thought we’d be swell and save you from getting snowed under trying to find something to buy.

Or to put it in a less breathy sentence: we’ve got some top Linux gift ideas to help make festive shopping a little easier this season.

Below is our short, but sweet concise round-up of cracking gift ideas for Linux enthusiasts. There’s plenty to suit all price points, and more than enough ideas to help inspire you into a white, wintery, commercial wonderland…

Disclaimer: This list does not contain affiliate codes. We have not been asked, paid, or persuaded to mention any item/seller/product on this list.

We’ll kick off cheap — and highly unoriginal. But unless you’re shopping for someone who’s an avid attendee of tech conferences, a USB drive makes for a practical (if impersonal) stocking filler.

A 16GB thumb drive is roomy enough to boot multiple distributions and costs from £5 in the UK, and as little as $6 in the US.

Bonus tip: try to find a novelty USB stick designed around a specific interest or theme that you know the person you’re buying for like. For example, a quick Google turns up Tardis USB sticks, Star Wars USB sticks — and even some super cute penguin USB drives (as above, £7.95).

For Getting Things Done you can’t beat the ol’ pad and paper. The Canonical online store sells a range of stocking-sized stationery items sure to go down well with Ubuntu fanatics over the festive period.

If the person you’re gifting loves baking as much as they love apt-get installing, consider this adorably cute Tux-shaped cookie cutter on Etsy.

At a relatively cheap £6.50 it makes for a really novel stocking filler — and is a selfish way to ensure you get some sweet treats to taste as a thank you!

Penguin shaped christmas gifts tend to huddle together on shop shelves this time of year — which it handy for you, as the Linux mascot is a penguin

A quick search on homespun nirvana Etsy turns up all manner of Penguin themed items, from sterling silver penguin cufflinks (£147) to a penguin-themed laptop sleeve (£24.58), mason jar light (would look great on a desk, £16.99) and laptop decal (£2.05).

You’re not limited to online, either. I saw a penguin-shaped cocktail shaker in a local supermarket for £12!

Waddle  along similar lines and you may come across a gift that is both practical and thoughtful!

Flat out the creepiest present you could give this year are the EFF’s laptop camera cover stickers ($5) — but hey, it’s a gift small enough to stick inside a xmas card.

Aside from indulging in some slightly misplaced paranoia you do support the sterling work of the Electronic Frontier Foundation do.

Sticking to the ‘anything penguin’ theme one catch-all present you can’t go wrong with is a (luridly vivid) penguin themed christmas jumper.

A quick hop over to Google with the terms “penguin christmas jumper” reveals all sorts of contenders.

There’s nothing like warming yourself up on a cold December morning by slipping on …an official Ubuntu t-shirt.

Perhaps better suited to an Australian xmas, you’ll find a variety of t-shirts designs available on the Canonical store, including a design based on the latest release, Ubuntu 16.10.

Better yet most shirts are available in sizes S through XXL. Prices start from £12.

Not shopping for an Ubuntu user? No worries!

You can snag some equally fresh n’ shirty merchandise for a Linux Mint fan direct from the official Linux Mint store.

Shirt prices start from $33, and$5 from the sale of each shirt gets donated to Linux Mint — which is ace!

Whether you’re shopping for an accomplished sysadmin or a total desktop novice, there are a number of books and magazines catering to Linux users and enthusiasts, but knowing which are the best to pick can be tricky.

Shopping for an Ubuntu newbie? Add the latest entry in the Ubuntu Unleashed series to your shopping list. Written by Matthew Helmke, Unleashed serves as both an in-depth primer and companion.

Make sure that you buy a copy aimed at the current version of Ubuntu, as older copies can be picked up cheaply but may no longer be relevant or useful.

‘The Linux Command Line: A Complete Introduction’ could be a good distro-agnostic choice, though is perhaps better matched with an intermediate user than someone unable to click their way out of a digital paper bag!

Although some of its contents may be a little dated (it was published back in 2012) the bulk of it should still be relevant.

A Subscription to Linux Format… 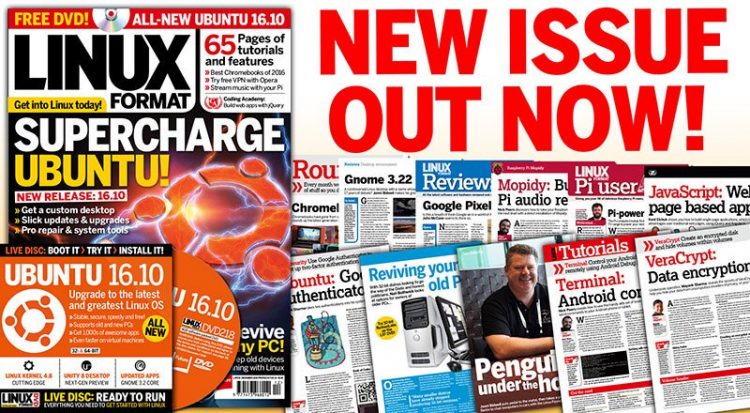 After something a little more …regular than a book? Have you thought about a Linux magazine subscription? There are a number of excellent Linux magazines published in the UK, Europe and in the US.

The best all-round Linux magazine is — in my opinion — Linux Format. Each monthly issue is packed full of news, interviews, tutorials and reviews that span a wide range of subject matter. Plus, if you buy the print version  in the UK each issue also comes with a free DVD packed full of awesomeness.

Linux Format subscriptions start from as little as £14.

…Or Another Geeky Tech Magazine

Linux Format isn’t the only geeky choice when it comes to magazine reading.

Some related topics that may be of interest include Raspberry Pi magazines (including Raspberry Pi Geek and Pi User), Ubuntu User, Linux User and Developer, Android magazines, and more general technology publications.

Give ’em a Google to learn more.

Admittedly a gift card isn’t the most personal of gifts to give, but in a pinch they are worth considering. 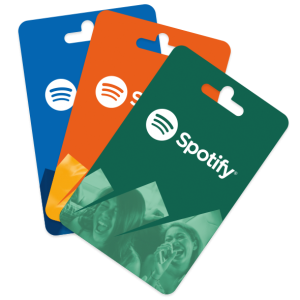 There are more than 2,500 Linux games available on Steam, making a Steam gift card (or “Wallet Code” as they’re also known) a relatively cheap but potentially hugely entertaining gift.

Pick up a card from Game in the UK or Gamestop in the US, and top it up with money through the cashier.

Most people enjoy music, and with the world’s largest catalog of streamable tracks, the gift of ad-free Spotify listening could be music to someone’s ears this Crimbo!

You don’t have to stump up a full year’s worth of subscription fees. Denominations are available from £10 (one month Spotify Premium) through to £50 (five months Spotify Premium).

If you find yourself totally stuck or out of ideas you could plump for an Amazon gift card. These can be bought in a range of amounts and can be redeemed against pretty much everything the site sells, meaning you get to look good for giving a gift, and pass the burden of what to actually buy! 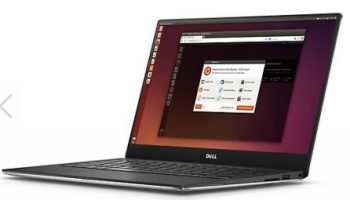 If you’re really planning to splash the cash this season you may want to buy a system with Linux pre-installed from a Linux-friendly PC vendor like ThinkPenguin, System76, or ZaReason.

Each vendor stocks a wide range of laptops and desktop PCs at varying price points, and some are (we’d hope) have some yuletide offers available during the run up to the big day.

The Dell XPS 13 was recently updated, and is considered to be one of the very best Linux laptops that you can buy. Prices start from $949.50.

Shopping for proficient tech geek but don’t want to break the bank? You may want to look in to purchasing a Raspberry Pi starter set. Ideal for hobbyist tinkerers and IoT developers. There’s even a version of Ubuntu built specifically for these low-cost, low-power boards.

Know someone who can’t tear themselves away from the latest game to hit Steam? Why not enhance their experience with a tangle-free bluetooth button basher (aka ‘game pad’ to you and I). The Steam Controller costs around $49 and works out of the box with Linux.

Spending £50 on a lightbulb sounds a bit dim, right?  It might be the brightest decision you’ve made in a while, as you can dim the lights, change the colour and help set the mood. Better yet, Hue lights are said to be 80% more efficient than traditional bulbs too.

Linux users are no longer left in the dark thanks to an unofficial Philips’ Hue Linux app that’s now available on the desktop.

Google’s inexpensive TV dongle lets you send audio and video content from the web to any HDMI-equipped TV in your house.

Better yet, it not only works with Linux, it runs on Linux!

Since you can ‘cast’ audio from Linux to a Chromecast, as well as video (not to mention the prospect of VLC cast support arriving soon), it could make for a cheap but very appreciated present.

Priced from $35 (though you’ll find it much cheaper by shopping around).

If the person you’re buying for already has a laptop think about things like laptop sleeves, cases, and/or. Be sure to check with them on model name and number before buying.

Other peripherals are sure to work, so think headphones, and a barrage of of USB-powered desk clutter.

What Linux-related goodies are you hoping to find excessively wrapped under your xmas tree this year? Share your wishlist in the comments! 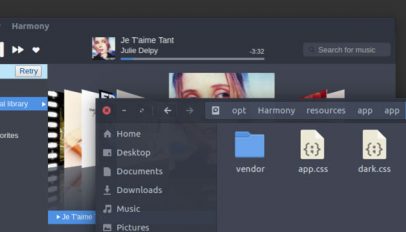