I know what you’re thinking: “Not another electron app!?” but this one is at least a bit different to the usual web wrapping schtick.

For, unlike Anatine which we wrote about at the end of July, Nocturn is not a frame around the regular Twitter web interface.

Instead, it uses web technologies to create a new, native interface.

Albeit a rather simple one.

Nocturn Is Big On Shortcuts

Nocturn is a keyboard user’s dream. It has vim-style keybindings and necessitates the use of keyboard shortcuts to perform many common Twitter actions like retweet, fave, and reply.

Let’s say you want to retweet a tweet (for which you’ll see there’s no clickable icon for). You first select the Tweet by clicking on it (or by using the ‘j’,’k’, or arrow keys) and then you press Shift + R.

But it doesn’t feature:

Nocturn is a practical, functional Twitter client. It lets users connect to multiple accounts and switch between them easily. For basic Twitter usage it’s perfectly fine.

But power-tweeters will find the lack of support for advanced features, like media uploads, quote retweets, inline image previews, etc., a fuss.

There are also no customization options to adjust the look or feel of the app, which is a shame as the font size is a touch on the wee side.

Nocturn is free, open-source software. It’s available to download as a pre-compiled binary for Linux desktops.

Learn more about Nocturn on GitHub

The first time you run the app it will ask you to authorise a valid Twitter account. This happens in-app and there’s no obvious way to double check that you’re connected to the real Twitter website.

But once you’re logged in you can add a second, third or even fourth account by clicking your user avatar (next to the status update box) and selecting “Add new…“. You’ll be asked to log in and authorise the account.

If you’d prefer to use something less web-centric do check out the GTK Linux Twitter app Corebird, which recently scored a big update. 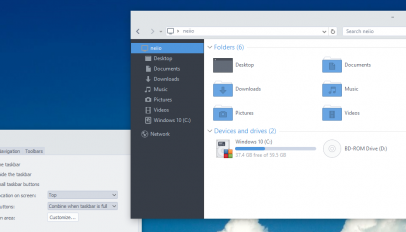 Yes, Someone Has Ported The Arc GTK Theme to Windows
Read Next