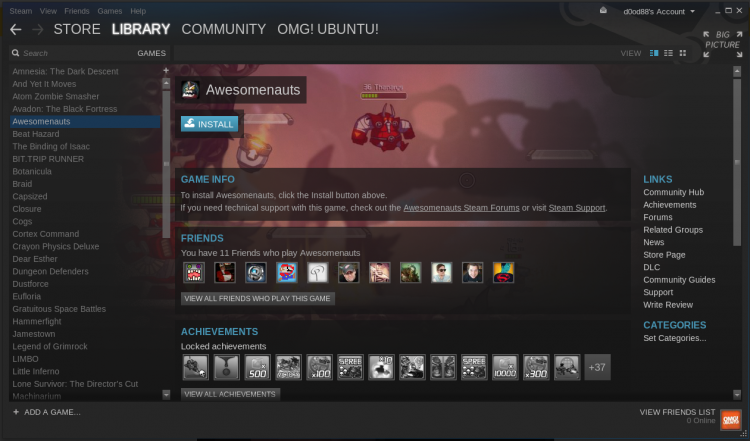 There’s a new version of the Steam Client now available — and it comes with a bevy of tweaks to the way it looks.

Valve say the interface changes being introduced in this release are designed to ‘simplify controls’, refine navigation and introduce a colour palette in keeping with the look of the Steam Powered website and in-app Big Picture Mode.

What this means in visual terms is a lot less grey, and a lot more turquoise-y green and electric blue hues cropping up in buttons, menus and borders.

The changes have been trialled in the client’s beta channel for a little while, and as subtle as they are they haven’t gone over all too well with many Steam diehards. Personally, I think the tweaks look okay. It’s not a dramatic difference, but as a sucker for consistency, it’s one I can appreciate.

Of course, Valve are nothing if not hardworking. This release doesn’t stop at some skin deep touches. The client, as ever, benefits from a batch of under-the-hood, technical and performance improvements, including:

Of all the changes, both minor and major, it’s this one that I am most appreciative of.

Yes, Valve has finally acceded to a long-requested option to hide games from in the library list views.

Anyone else who, like me, has a seemingly endless stream of Humble Bundle titles that will never get played will want to make use of this feature.

To access the “Hide this game in my library” feature you need select a title, then head to the ‘Set Categories’ menu and check the box listed at the bottom.

Once hidden, these games won’t show up under any filter other than a newly appended ‘Hidden’ filter which, to keep things streamlined, only shows when there are games marked as such. Neat!

But don’t panic; although hidden these games are still owned by you, are still available to install and play, and will still appear on your Steam profile.

If you already have Steam installed you’ll pull down the update the next time you open it. If you don’t have Steam, and are running Ubuntu, you can hit the button below to trigger installation.

To geek out with the full change log for this release head on over to the Steam website.

atarixle You got 9 years time, when Linux on M1 is…
Devs Get Ubuntu Running on Apple Silicon, Say It’s ‘Completely Usable’