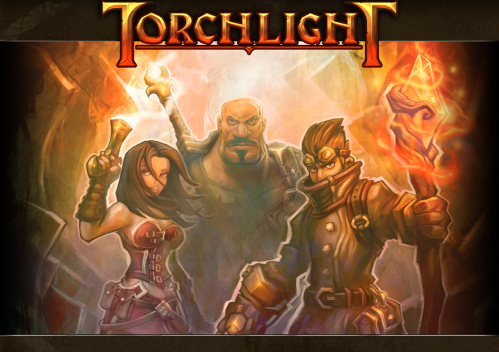 Between all the Humble Indie Bundle games to land on Linux thus far, few have a team as distinguished as Torchlight’s.

Developed by Runic Games, Torchlight is an action RPG that follows the point-and-click model of the popular Diablo series.

Indeed, the founders of Runic, Erich and Max Schaefer, co-founded the company responsible for the first two Diablo games.

Unlike its spiritual predecessors, this title feels smaller from the start. The town of Torchligh establishes the medieval fantasy tone from the start. But whilst my early adolescent days of Diablo II took me across juxtaposed locales, the only way out of Torchlight is down. The entirety of the title’s hack-and-slash mayhem takes place in the nearby Ember mines.

Though the geographical limitation feels claustrophobic at times, the 35 dungeon offer a variety of environments and creatures to keep you occupied for several days. The first set of dungeons are the usual cavernous mines, but forested ruins and sinister fortifications loom even lower.

Bipedal felines, electrocuting turtles, poisonous zombies, and gigantic spiders are amongst the wide variety of creatures you encounter along the way. As you descend through the Ember mines, loot chests await your greedy hands – some offering masses of gold, others triggering traps or filling the room with a nightmare-enducing swarm of spiders.

As a compulsive hoarder in role-playing games, I found loot drops somewhat problematic and further exacerbated by issues in the Linux port. The mass of loot makes it difficult to differentiate between dropped items or to outright notice them when hidden behind scenery or simply piled under tonnes of leather armour.

When defeating one of many bosses scattered across the dungeons, the game would freeze momentarily before a loot drop. Having never played this title on other platforms, I can’t say whether this is a bug specific to the platform, or even to my setup, but it is a jarring moment in otherwise smooth gameplay.

As a left-handed gamer who also uses the mouse in my left hand, customising keyboard shortcuts is always the first thing I do; but Torchlight offers no such customisation (at least not without rummaging through text configuration files). This in itself wouldn’t be a problem, as the click-heavy gameplay only depends on shortcuts for quick activation of potions and spells. The issue arises with the keybinding for showing and hiding labels on dropped items – the alt key. Unfortunately, pressing the key to toggle the obtrusive, but useful, labels activates the Unity HUD. A show/hide labels button is provided in the “hotbar”, but accidentally pressing alt is nevertheless a frustrating issue, especially when playing in fullscreen mode.

Even with the labels enabled, mousing over items or their labels is a laboured process, often cycling through the various items indiscriminately. I also found myself losing the sometimes inconspicuous cursor when a horde of enemies surrounded my character. Directional attacks or those that need to target individual creatures suffer most from this issue, but the wide variety of spells and weapons offer a way out of any situation.

Like other RPGs, Torchlight features several distinct, albeit sparse, skill trees. Melee, ranged, and spell-oriented classes offer initial specialisation in character creation, but the skill trees are open for any character to explore. My melee-classed character became an adept ranged fighter in no time once the giant spiders showed up. 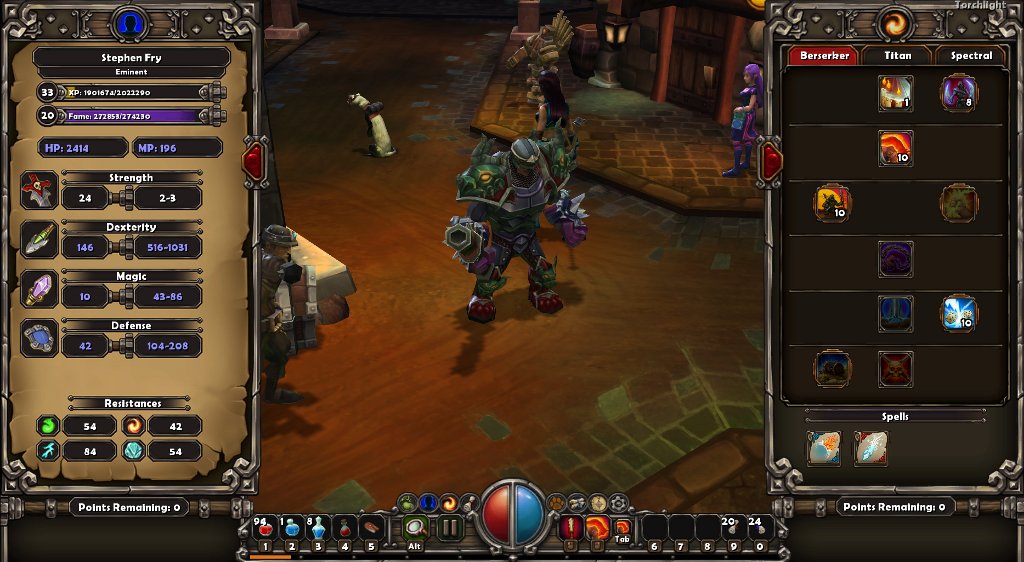 As you level up and your fame increases, you can add points to your skill tree and to various character attributes. Adding points to strength, dexterity, magic, or defence permits the use of more powerful weapons and increases the damage for weapons that benefit from each skill. Dexterity, for example, increases damage to ranged weapons, whilst additional strength aids melee attacks.

But you won’t have to fight alone. Your character starts with a companion of your choosing. Between a dog, cat, and ferret, your faithful companion can carry additional loot and use its own set of spells to supplement your attacks.

If its health is too low, your pet will flee and return when it regenerates. Though not essential to the gameplay, the pet does complement it well. If you’re unwilling to leave the dungeon to sell your abundant loot, you can send your pet back on its own and continue exploring whilst your companion trades off-screen and returns with gold.

As for the impetus to explore the dungeons, the main storyline sees you tracking down a character corrupted by the Ember and occasionally listening to journal entries that offer a small glimpse at the rather unexciting plot.

The side quests are understandably limited given that you’re confined to the town of Torchlight. One characters opens portals and asks you to retrieve various items on the other side; a robot troubadour looks for fame by asking you to defeat bosses across the 35 levels; and a scholar seeks embers scattered in the dungeons below.

Though the quests themselves are rather banal in the rank and file of action RPG and dungeon crawlers, the otherwise pleasurable gameplay makes up for some of the creative elisions.

Torchlight is neither breathtaking nor outdated

Originally released in 2009, Torchlight is neither breathtaking nor outdated. The town is the least visually appealing locale, but the dungeons that make up the majority of the game are well-designed and atmospherically impeccable. Overgrown forested areas feel natural and alive whilst the clean lines and restricted palette of bricked dungeons feel sterile and perfectly ominous.

Character design borders on the comical rather than formidable. This isn’t to the title’s detriment, as the visual tone of the game lends itself to the exaggerated, sometimes cartoonish, features of the character models.

Rest assured, spiders are still as frightening here as they were in Diablo II with its much darker tone.

Playing with the latest Nvidia 310 drivers on a GTX 260, fullscreen and windowed mode both performed well at the highest settings.

As always, your mileage may vary, though a netbook mode can be enabled if performance is still an issue.

Critically-acclaimed Diablo composer Matt Uelmen invigorates the soundtrack with a light medieval fantasy flare. The town’s theme mixes a bit of rustic nostalgia with a hint of the fantastical that complements the quaint town. The music throughout the rest of the game quickens as fighting ensues and dies down to an ominous undercurrent mixed with the eerie sounds of each unique landscape.

Voice acting is rather sparse aside from the journal entry voice overs. Characters in Torchlight tend to have a single phrase or set of catchphrases with any additional dialogue in a scrolling pop up. Creature sounds range from the laboured steps of giant bosses to the crackly joints of thin-legged spiders.

Weapon sounds are also beautifully captured. The short delay between clicking and hearing the crack of a gun or twang of a bow is perfectly timed, whilst hitting most enemies results in a satisfying thud. When mayhem ensues, the cacophony is almost unbearable, but the chaos of the moment certainly comes across in the aural bombardment.

By the time I reached the conclusion of the main storyline, I was underwhelmed by the storytelling, but still charmed by the varied landscapes and satisfying gameplay. Though I wouldn’t replay the main storyline again, completing it opens a set of dungeons for every subsequent character that features limitless and randomised levels and creatures from every dungeon in the game.

Even for an experience that lasts a single playthrough, Torchlight is a beautifully crafted, if small, action RPG that ranks among the best of the growing Linux gaming library.

Torchlight was included as part of Humble Indie Bundle 6. Whilst the game itself is available on Steam, the Linux version has yet to be added.

The game is, however, available in the Ubuntu Software Center for $14.99. You can redeem a USC copy from the Humble Bundle website as well.

Torchlight on the Ubuntu Software Center 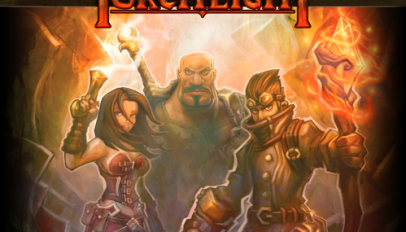 Torchlight feels smaller than other games in its genre, but delights with visual, aural, and classic action-RPG appeal. 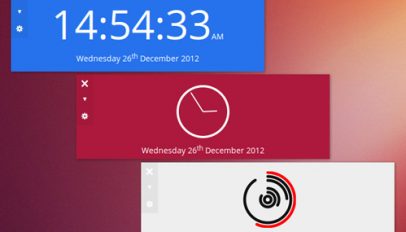 ‘Clock’ Is a Slick Desktop Time App for Ubuntu
Read Next