The racing title has proved popular on OS X, spending several weeks at #1 in the Mac App Store’s ‘Top Free Games‘ chart and 5 months in the top 10.

Now the developers behind the game, which is also available on Android, are bringing it to Ubuntu.

The game’s popularity is not without foundation.

Players can control one of 22 remote-controlled-style cars across 24 tracks split into circuit and sprint races. Missiles, mines and speed-ups can be picked up en-route for devilishly destructive duelling; and each track has its own fair share of obstacles, ramps, and challenges. 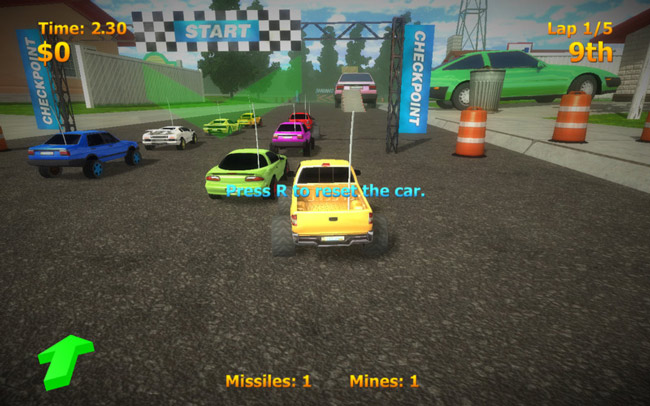 An added ‘cash incentive’ within the game rewards you for creating mayhem on the track, pandemonium for other players, and displaying elite driving skills on the track. This cash can then be covereted into coins to spend on pimping out your ride with different colours, wheels, etc.

Options include 4 modes of difficulty (including ‘easy’ and ‘insane’, and whilst only 3 cars are unlocked to start with, there are another 15 to unlock as you play.

Graphically it might not be the most awe inspiring racing game you’ve ever set eyes upon, and its gameplay isn’t genre-bending or definitive. But heck, who cares? RC Mini Racers is everything its real-life equivalent is: frantic, fast-paced and fun.

Although the Mac and Android versions of the game are free to download the Ubuntu version won’t be – it will cost $4.99.

But before anyone kicks a RC Mini Racer over the back garden fence, there is a valid reason for this.

Ubuntu doesn’t offer a native framework for in-game purchases, something the other platforms do. So whilst Mac and Android users can get the game for free, they need to shell out cash for more a wider selection of racing vehicles .

With an intended $4.99 price tag, the Ubuntu version won’t have this limitation; you unlock more cars are you advance through the game. This might sound boring but it has the effect of making the Ubuntu version feel more like a traditional racing game than the ‘limited freemium’ title that critics on other platforms chastise it for.

When Can I Get It?

RC Mini Racers has been submitted to the Ubuntu Software Center, so although it’s on its way it could  still be a few weeks before it’s published and ready to download.

We’ll have a full review of the Ubuntu version up shortly, and we’ll be sure to give you all a poke when it’s ready for purchase.

Should the application prove popular the developer intends to not only update the game with more cars (OMG! Ubuntu! branded truck anyone? ;)), but bring more of his games, including fellow #1 Mac App Store hit ‘In the Line of Fire‘ to Ubuntu.