The latest development release of The Gimp image editor comes with a handy option single-window mode, but what if you’re sticking with the latest, floaty-palette stable release, like those available in the Ubuntu repositories, but would love such a feature? Can it be done?

Yes, it can thanks to a project called ‘Gimpbox’.

Gimpbox is not a fork or a depreciated build of GIMP but exists to provide a single window mode to users of the image editor on version 2.6.10 or earlier.

The main sell of the script is that it does not require users to install any extra development packages, compile any builds form source or even add a PPA – all you need is your already installed version of GIMP and the script does the rest!

Whether you’re a self-confessed command-line fiend or allergic to the terminal, the instructions for getting and installing the GIMPBox script should be too intimidating.

First up you need to ensure you have GIMP installed. Go to Applications > Graphics sub-menu and look for an entry called ‘GIMP Image Editor’. If it is there you’re good to go, if not then head over to the Ubuntu Software Centre and install it from the Graphics department.

Edit: If you’re having trouble running this do ensure you have python-wnck installed.

This command will grab the GIMPBox script for running GIMP in single window mode and place it in your ‘bin’ folder. Contrary to the name this is not where trash goes but where files, scripts and other executables reside.

Next we need to grant it permission to ‘run’. Be careful when doing this, make sure you enter the command exactly as you see it.

To launch The GIMP in single window mode you can press ALT + F2 together and enter ‘gimpbox’ in the command field or by modifying your original GIMP menu entry like so: 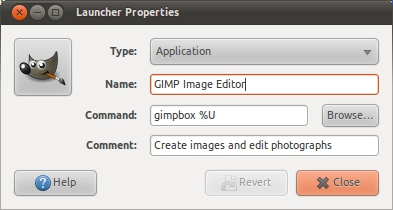 Ubuntu Software Centre with a pinch of Zeitgeist? More please!
Read Next