LibreOffice 6.1 is billed as “a major release” and features numerous user interface tweaks

LibreOffice 6.1 is billed as “a major release” in the ‘fresh’ series and features numerous user interface tweaks, improved documentation and help, and is said to be more compatible with Microsoft Office files than ever before.

A major open-source project, LibreOffice is the product of community code contributors collaborating together, some employed by well-known Linux companies like Red Hat and Collabora, others just working off their own individual initiative.

For more details on what’s new in this release, read on.

Announced by The Document Foundation, the non-profit organisation which oversees development of the open source office suite, LibreOffice 6.1 brings a number of major changes to users desktops.

Among them are the following key changes

The LibreOffice 6.0 release earlier this year included the elementary icon set, but not as the default.

Although in keeping with the Tango set they replace, elementary’s gentle, soft coloured icons lend the suite subtle consistency in its toolbars, dialogs and menus.

Use LibreOffice on Windows? You’ll notice a change too as a new icon set called “Colibre” is used by default on Windows 10 desktops.

The new icon set is called ‘Colibre’ and has been designed using Microsoft’s icon design guidelines. As well as adding a splash of modernity to the UI the Colibre icon set will help the suite better ingratiate itself into the Windows enviornment.

The icon changes don’t end there, either.

LibreOffice 6.1 also includes the Karasa Jaga icon theme. This set is the perfect match for anyone on macOS or KDE desktops who want glossy KDE Oxygen style glyphs in menus and toolbars.

Along with new in-app icons LibreOffice 6.1 also spots a set of new app icons. App icons are the ones you see in your application launcher or pinned to your dock:

As you can see, the new icons retain the folded-corner-document-page motif that the productivity software has used since its inception, but makes each icon’s file type flatter and more colourful, and improves the contrast.

It also helps improves the “on demand loading” of images in documents saved in Microsoft Office formats.

It might still be “hidden” as an experimental feature, but work on improving the LibreOffice ‘notebookbar’ continues apace.

The Document Foundation say the Notebookbar is “significantly improved” in LibreOffice 6.1, with the tabbed version now considered ‘complete’ in the Writer application!

The notebook bar remains a work in progress in other modules of the suite, but the aim is to eventually replicate a tabbed experience that is both as powerful and as simple as default toolbar-based GUI.

A headline features of the LibreOffice 6.x series is the ability to export Writer documents to ePub, the ubiquitous ebook format.

LibreOffice 6.1 improves things further for all wannabe writers by including a greatly improved EPUB export filter: 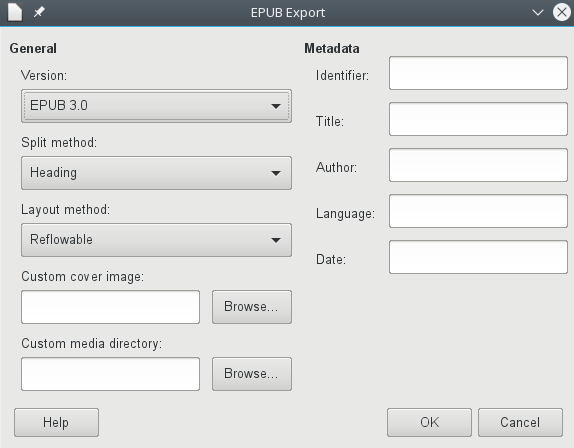 The dialog is better placed to handle link, tables, and images; supports font embedding and footnote support; and expands the range of metadata you can add/edit, e.g, ‘author’, ‘title’, ‘ISBN’.

There’s also support for fixed layouts, the option to set a cover image, and, should you need it, the ability to use vertical writing!

There are also two somewhat minor features shipping in this release, but both will save you headache of menu surfing.

And a new “cog” button in the “customize” dialog makes it much to customize, rearrange, rename, and reorder toolbars and top level menus to suit your tastes/needs/workflow.

A major improvement for Base, only available in experimental mode: the old HSQLDB database engine has been deprecated, though still available, and the new Firebird database engine is now the default option (users are encouraged to migrate files using the migration assistant from HSQLDB to Firebird, or by exporting them to an external HSQLDB server);

For more details on these and other changes do check out the full release notes for LibreOffice 6.1 over on The Document Foundation wiki.

Ubuntu 18.10, due in October, will ship with LibreOffice 6.1 as part of the default install — but you don’t have to wait until then to get it!

You will be able to upgrade to LibreOffice 6.1 on Ubuntu 16.04 LTS or later by adding the official LibreOffice ‘Fresh’ PPA to your software sources. At the time of writing 6.1 hasn’t been uploaded, but it should appear in the new week or two. 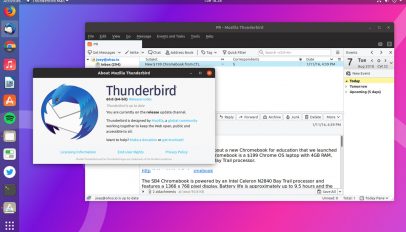 Thunderbird email client gets a new look, new features, and a new logo
Read Next