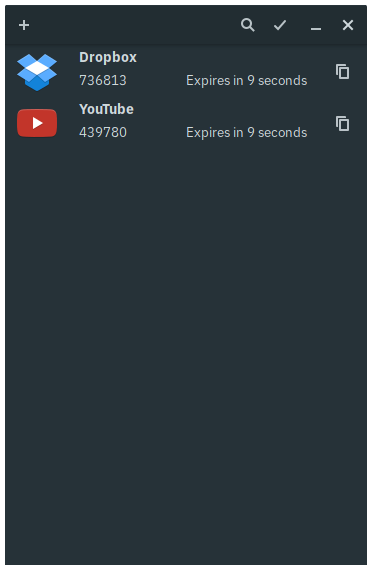 Looking for a two factor authentication code generator for Linux? Well, you can now use the past tense, as we’ve gone and found you one.

‘Authenticator‘ is an aptly-named, native, and easy to use two-factor authentication app for the Linux desktop.

It’s designed for GNOME-based environments like GNOME Shell, Budgie and MATE, but should work pretty much anywhere else you might need too.

The utility is the work of Belgian developer Bilal Elmoussaoui, the creator of Nautilus Folder Icons, Audio Cutter, and several other desktop Linux apps we’ve mentioned below.

What is Two Factor Authentication?

If you don’t know what two-factor authentication is then, quite honestly, where have you been?!

As the name implies two-factor authentication requires you to “authenticate” twice when logging in to a service, app or site: once with your regular user password, and then by entering a auto-expiring six-digit code generated by an authentication app (usually installed on your phone) or sent to you via SMS.

It’s like needing two keys to your apartment: one to get in, and one to prove it’s you who wants to get in.

The idea behind 2FA (as the cool kids call it) is that if anyone steals or crack your password they can’t use it in isolation; the requirement for a secondary code, which, in some instance, has to be generated for each new browser or device you login in from, creates an additional hurdle for a would-be miscreant to leap over.

A hurdle that they probably can’t clear without tripping off a warning to you, the account holder.

So why do I need a desktop app to generate a code?

You don’t need a desktop app to use two-factor authentication with your favourite services. It’s just that having one makes using a 2-factor set-up a heck of lot easier.

Think of it as a convenience rather than a necessity.

I use two-factor authentication everywhere I can, and currently get my second auth code from an app installed on my Android smartphone.

As stated, this is generally good: if someone steals your computer, but doesn’t have your phone, they can’t get in.

It’s less good if you regularly forget your phone, are prone to breaking or losing it, or simply find it an absolute faff-and-a-half to reach for it each time you need to send an email or check a DM fro your significant other.

So rather than reach for your smartphone each time you need to enter a two factor authentication code you can open this app on your Linux desktop and copy/paste your code across.

Being able to get your second factor from your desktop and laptop makes for a far more seamless user experience. Instead of typing in a code, you can just copy and paste it from the desktop app

A simple application that generates 2 factor authentication code, created for GNOME. It has a very simple UI that makes it easy to add a service, and even has a QR code scanner should it be needed.

Authenticator supports over 290 websites and apps, including a huge number of well known services, including:

Yes, this means the app can double up as a Google authenticator Linux client too — result!

Install Authenticator as a Flatpak App

Authenticator is available to install from Flathub. This only requires a single click on Fedora, Linux Mint, and some other distress:

You can also use the command line to install the app (assuming you have added the Flathub repo) by running this command:

You may be prompted to install the GNOME Runtime too.

From here on out, you can use an Authenticator code to unlock services, regardless of whether you’re online or offline. Just open the app, set up the account, and use it to generate codes.

Do you use two-factor authentication? What app do you use to generate codes? Let us know in the comments.