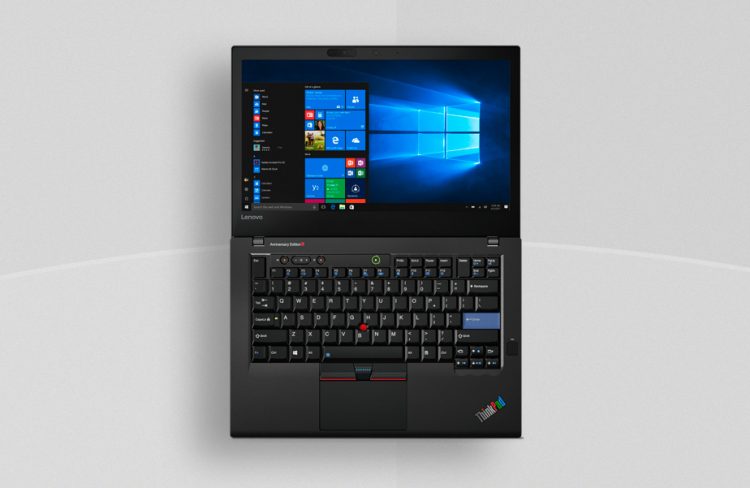 If you’ve been patiently waiting for your first proper glimpse of the Retro Thinkpad, consider yourself rewarded.

An image of what appears to be the retro ThinkPad was uploaded to the Lenovo website, where it featured as part of a partner promotion. The photo was promptly removed once Reddit found it.

Although small, and yet to be “officially” presented, the leaked image gives fans of the laptop line plenty to lust over.

Arriving in October, the Retro ThinkPad is being released to mark the 25th birthday of the influential (and dare I say iconic) ThinkPad laptop line.

Lenovo took over the ThinkPad line from IBM back in 2005 but plan to honour the heritage inherited. The brief of the Retro ThinkPad is simply to fuse newer technologies with elements from, and have nods to, other, older ThinkPad designs from over the years.

To gauge feedback on the exact features the Thinkpad faithful want to see in the celebratory device Lenovo has held a number of surveys.

While it’s unlikely that the limited edition anniversary ThinkPad will satisfy all of fans wants — I see no closing hooks, Thinklight, 16:10 screen, etc — it should have enough nostalgic nods to please.

Thanks to Lenovo’s David Hill it is common knowledge that the device will have a black rubberized coating, a TrackPoint, and feature a “classic keyboard”.

‘The keyboard has a 7-row layout, large escape key, and central power button — exactly as things used be!’

And if this image leak is legit, it’s this ‘classic’ keyboard that is the real selling point.

The chiclet/island style layout used in current-gen ThinkPads is (mercifully) replaced by a more traditional and shapely (and hopefully click-y) keyboard for the retro model. It even has an old-school 7-row layout, and the power button is located centrally, exactly as it used to be.

No jokes about the giant escape key being there solely to benefit vim users.

With the actual release date fast approaching it shouldn’t be too much longer until Lenovo shares the full skinny on the device.

Which many Linux fans are eagerly awaiting as, although ThinkPads don’t come pre-loaded with Linux, the laptops are hugely popular with Linux users.