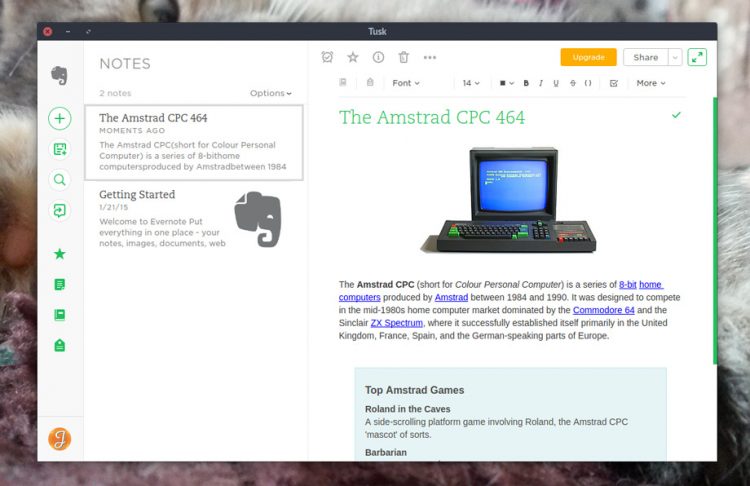 Tusk is a new unofficial and open-source Evernote app for Linux, Mac and Windows.

Evernote is used by more than 100 million people worldwide, a following so large that the service is practically a by-word for productivity!

But with no official Evernote app for Linux, Tux loving fans of the nifty note taking service tend to rely on unofficial community apps like NixNote, EverPad, NeverNote and Whatever.

There’s also the official Evernote web app, which works in any modern web browser on any modern operating system, including Linux. But this client has a few …deficiencies, including a total lack of keyboard shortcuts/navigation, a searingly bright default theme, and (obviously) is stuck inside the browser.

Tusk is an open-source Evernote app built using Electron. It takes the standard Evernote web-client and bolts on some handy desktop features, including optional dark and sepia themes and a huge set of keyboard shortcuts for managing, creating and editing notes.

And I do mean a huge set of keyboard shortcuts:

If you consider yourself to be content with the standard Evernote web app in a browser tab then, quite honestly, Tusk is not going to woo you. As an Electron app Tusk is not the most resource efficient option, something that becomes apparent the long it stays open.

The tray icon is currently non-optional. A shame as, on my GNOME desktop at least, it’s seriously oversized and only offers two options: focus the window and quit.

But if you long to close your browser to focus on note taking exclusively, or want to use keyboard shortcuts to navigate and manage your Evernote notes, then Tusk is a well worth considering.

Keep in mind that this app is not officially supported by the Evernote Corporation, but as the wrapper and its added extras are open-source you can file bug reports and make feature suggestions on the Tusk Github page.

Eager to try Tusk out? You can download Ubuntu/Linux, Windows and Mac installers from the following page:

A B They just keep adding specs nobody wants... We need way…
Raspberry Pi 4 is Now Available with 8GB RAM