Thanks to the Raspberry Pi — the new $10 Pi Zero W included — the world isn’t no longer short of choices for single-board computers.

The board is two-thirds the size of a Raspberry Pi, and can run Ubuntu Core, Ubuntu MATE or Android’

And many pack in more powerful specs than the humble fruit-based offering that’s most popular. We’ve seen the Orange Pi PC 2, the Pine A64, the ODROID, and many more.

Joining the fray is the $30 NanoPi M1 Plus from FriendlyElec. The board is two-thirds the size of a Raspberry Pi, and already has Ubuntu Core and Ubuntu MATE images ready for it.

Design wise it is similar to the Orange Pi PC 2,  but unlike that board the NanoPi M1 Plus does include on-board Wi-Fi and Bluetooth. Heck, it has an IR receiver and microphone, and there are separate power and reset buttons. 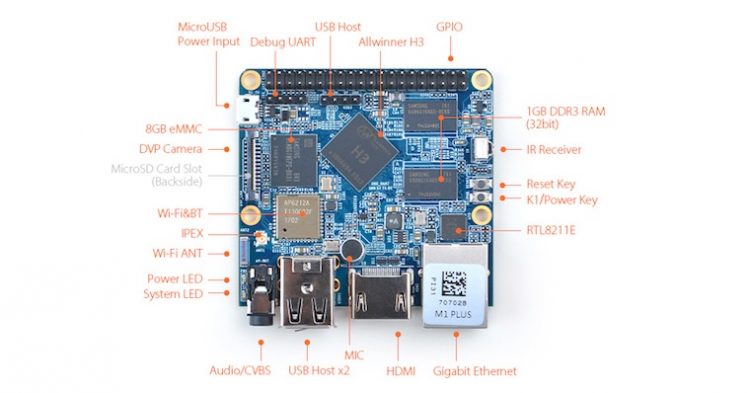 The NanoPi M1 Plus uses the Allwinner H3 system-on-a-chip (SoC), has 1GB Ram and (somewhat uniquely) 8GB of eMMC storage.

Ports wise it has an audio jack, full-size HDMI out, 2x USB 2.0 and 1 microUSB/OTG ports, gigabit ethernet, and a MicroSD card slot

The NanoPi M1 Plus is available to buy now, but the $30 price is (apparently) a limited time thing, so if you want one at this price you may need to get your skates on.

Buy NanoPi M1 Plus from FriendlyElec