Older versions of the Skype desktop app for Windows and macOS will stop working on March 1 this year — but will the cessation apply to the desktop Linux app too?

That’s what users of the Qt-based Skype for Linux desktop app have been left  wondering, after Microsoft sent out an e-mail at the weekend with the following rather worrying subject line: “Final reminder to update Skype; your desktop version ends soon“.

That e-mail goes on to state that version 4.3 of Skype for Linux will no longer work after March 1, 2017.

But is the client actually about to hit end-of-life?

Update: Skype has since spoken about the future of its Linux client. More info here.

Skype is undergoing a transition to cloud technology

In a blog post from earlier in the week Microsoft says users who run older versions of the Skype for Windows and macOS clients will no longer be able to sign in as of March 1. Microsoft do not mention Skype 4.3 for Linux being retired in this blog post.

In fact, the company doesn’t mention Linux at all!

Skype’s developer announced plans to end support for its older (native) Mac and Windows clients as part of a “transition […] from peer-to-peer to a modern, mobile-friendly cloud architecture”. Shortly after the company announced the launch of Skype for Linux Alpha client, a quasi-native app which dresses the Skype for Web client in a desktop wrapper.

So what’s going on?

The e-mail urges Linux users to ‘upgrade’ to the latest version of Skype, which is a bit of a head scratcher as Skype 4.3 is the the current — and official — stable build of Skype for the platform.

We reached out to Microsoft for comment or clarification but the company has yet to reply.

Linux users have taken to the Skype community forum to ask for more clarification over the end-of-life decision, with some suggesting that the desktop version should continue to be supported after this transition date in light of a feature deficit between the siblings.

Microsoft say they’re committed to delivering “…the best possible cross-platform experiences”, which requires them to “assess when it’s time to increase our focus on the platforms of the future. Sometimes this means that we must end support for some devices and operating systems.” Their solution is to offer “…web-based native version of Skype for other supported platforms [which] benefit from the latest ORTC or WebRTC technology”.

Skype recently began to roll out video call support in Skype for Linux Alpha (aka Skype for Web). Whether it phases out the Qt app or not, I’d be surprised if the rollout for that (and for Skype landline calling, as already supported by Skype for Web, isn’t complete by March.

For now you continue to download, install and use the native client. Just don’t be too surprised if you can no longer sign in using it in March. 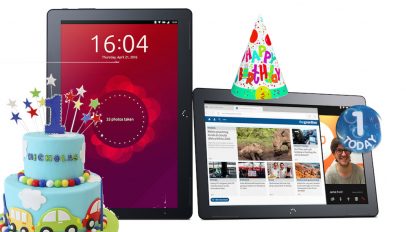 The Ubuntu Tablet Was Announced One Year Ago Today
Read Next