Made by Spanish OEM Bq, the 10-inch tablet runs the same core Ubuntu operating system as the Ubuntu Phone but the user experience dynamically adapts based on input and screen size.

Now Read: ‘Everything you need to know about the new Ubuntu Tablet‘

This means it’s able to work both as a tablet and provide a full Ubuntu desktop experience — the first such device to do so.

Canonical say the M10 is ‘the first in a series of converged devices’, suggesting that more hardware will be announced in the coming months.

The company is to demo the Aquaris M10 Ubuntu Edition tablet at Mobile World Conference in Barcelona later this month alongside new community ports for Sony, OnePlus and Fairphone handsets. 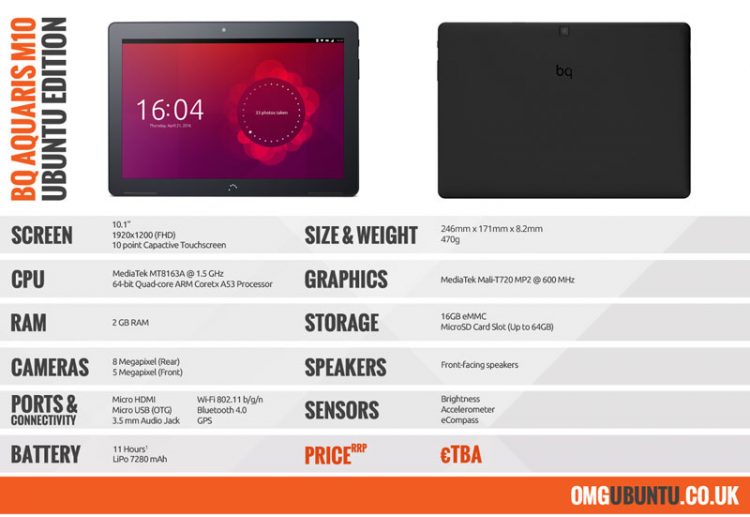 As a device designed to cater to both content consumption (tablet mode) and content creation (desktop mode), the Aquaris M10 needs to have the specifications to match.

And thankfully it does.

Inside is a 64-bit MediaTek MT8163A 1.5GHz quad-core processor, 2GB of RAM, and 16GB of internal memory. A micro SD memory card is included, adding storage expansion of up to 64GB.

Furthermore, the converged slate includes an 8-megapixel rear camera with autofocus and dual LED flash (and capable of recording in full 1080p), plus a front facing 3-megapixel camera for video chats, vlogs and selfies.

‘Convergence gives the right user experience at the right time’

The firsts don’t stop and start with the slate form factor.

The M10 is the first device to deliver on Canonical’s vision of the future of computing: convergence.

Convergence for Canonical is the idea that you don’t need distinct, separate devices, each running their own apps and operating system — you only need one brain, and one OS.

‘The fact it’s an Ubuntu tablet is not a unique proposition’, Jane Silber, CEO of Canonical, explained to us in a press call yesterday.

Silber sees convergence as an ‘opportunity’ to create a ‘common, adaptable platform’ that everyone is free to build on, from app developers to network service providers. It just happens to be Ubuntu building it.

For enterprises in particular the benefits of convergence are in a streamlined device management and deployment and inherent enterprise-grade, system-based security.

“For many organisations wanting to take tight control over their own systems, avoiding third party access, Ubuntu is ideal,” Silber notes.

Tablet mode offers a side stage for running two apps side-by-side, plus a full range of legacy desktop applications, mobile apps and scopes.

LibreOffice, Mozilla Firefox, The GIMP and Gedit are among a ‘curated collection of legacy apps’ to ship pre-installed on the tablet.

It will also be possible for developers and enthusiasts to install virtually any ARM compatible app available on Ubuntu using the familiar ‘apt-get‘ command.

“We’re bringing you everything you’ve come to expect from your Ubuntu PC, now on the tablet with BQ, soon on smartphones. This isn’t a phone interface stretched to desktop size – it’s the right user experience and interaction model for the given situation,” says Canonical CEO Jane Silber.

Canonical has, once again, partnered with Spanish OEM BQ for the launch.

BQ say they’re “excited to be the first OEM to ship the converged Ubuntu experience.“

“It’s this kind of innovation that makes BQ and Ubuntu such a great fit.”

The M10 Ubuntu tablet will go on sale globally in March. Price is to be announced but expect to pay somewhere around the ~€259 mark.